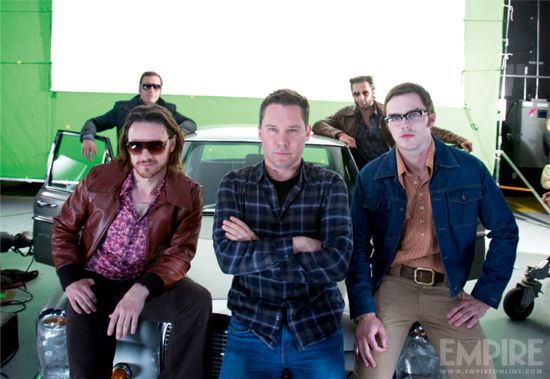 If there was any doubt that tomorrow's 2014 movie preview issue of Empire Magazine was a must-buy for comic book movie fans, here's one more reason to pick it up. Empire Online has just released a new behind-the-scenes photo from X-Men: Days Of Future Past, which will be in the issue. The photo features X-Men: Days Of Future Past director Bryan Singer front and center with James McAvoy as Professor X, Michael Fassbender as Magneto, Hugh Jackman as Wolverine, and Nicholas Hoult as Hank McCoy.

The ultimate X-Men ensemble fights a war for the survival of the species across two time periods in X-Men: Days Of Future Past. The beloved characters from the original "X-Men" film trilogy join forces with their younger selves from "X-Men: First Class," in an epic battle that must change the past -- to save our future.

X-Men: Days Of Future Past New Behind The Scenes Photo Released