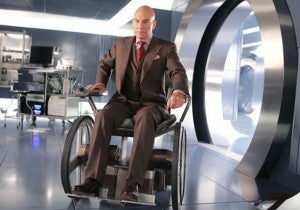 Okay, so this probably stands to reason given the plot of the story, but it's certainly the first we've heard anyone get even remotely close to confirming it: the Comic Book Club podcast (via Bleeding Cool) is suggesting that Sir Patrick Stewart is set to appear in another X-Men film, presumably the forthcoming X-Men: Days of Future Past, in which different timelines and realities are at play and we could plausibly see both Stewart and James McAvoy, who played the Stewart's role (Charles Xavier) in X-Men: First Class.

Their "confirmation" is anything but official, though--apparently one of the show's regular listeners informed the hosts that when Stewart came into the Apple Store he works at, he asked the actor directly about the prospect of another another X-Men film in his future, and the actor nodded.

Now, of course, an unofficial, nonverbal confirmation made to a non-reporter at the mall isn't exactly strong enough confirmation to break Watergate wide open, but presumably their source would have no particular reason to lie about this, and it jives with what we already know about the film.

Having taken place in Uncanny X-Men #141-142, Days of Future Past featured Kitty Pryde spurring the X-Men to action against the Brotherhood of Evil Mutants, who are plotting to assassinate an anti-mutant U.S. Senator. In the comics, his death provokes a massive reaction from the U.S. government that results in mutants being forced into internment camps. When Pryde manages to project her knowledge back in time to her younger self, the team’s mission becomes to protect the man and change the course of time. The film is meant to start shooting shortly (back at the beginning of August they said "a few months") and will be in theaters in 2014.

X-Men: Days of Future Past to Include Patrick Stewart?