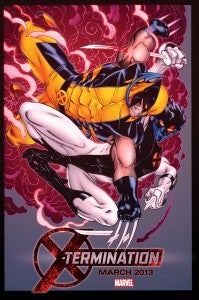 The Marvel Universe is poised for an X-Men-centric crossover event beginning in March as "worlds collide in X-Termination, according to a visual press release from Marvel Comics.

The teaser image shows Wolverine squaring off with a version of Nightcrawler that looks like it may be the one from the Age of Apocalypse, a comic that stars a group of human, anti-mutant resistance fighters called the X-Terminated. Like most characters in Age of Apocalypse, Nightcrawler could find a reason to have beef with Logan.

(Note that the Age of Apocalypse Nightcrawler had, until very recently, been appearing regularly in Uncanny X-Force.)

Wolverine, in his classic striped superhero costume, sharing cover space with the Nightcrawler clan is pretty reminiscent of the reality-hopping X-Treme X-Men with Kid Nightcrawler, so it doesn't seem entirely implausible that those two books--both of which trade pretty regularly in alternate timelines and the like--might be crossing each other's paths in this story.

Look out for a formal announcement soon; no creative team is listed.

X-Men Get Their Own Event in March With X-Termination