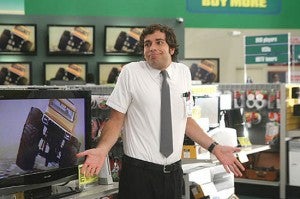 Earlier tonight, we told you about an Electronic Entertainment Expo (E3) All Access special set to air on the male-oriented cable network Spike TV. They will, among other things, be debuting some exclusive Star Wars content on the show. Well, here's the part we didn't get to: former Chuck star Zachary Levi will be lending not only his face and voice but his company, Nerd Machine, to Spike TV for not only that but a series of "All Access" specials airing for a number of upcoming events. "The Nerd Machine is here to give fans a front row seat to all the action from E3, Comic Con, and especially our flagship event Nerd HQ this year," said David Coleman, co-founder of the Nerd Machine along with Levi. "We are thrilled to partner with Spike's All Access specials to help showcase everything we love about the world of gaming and pop culture." According to The Hollywood Reporter, Nerd Machine will be covering E3, Comic-Con International in San Diego and finally the Consumer Electronics Show this year, before Levi will presumably settle into a more normal schedule as he begins looking at pilot scripts for the new TV season.  The actor has previously hosted Spike TV's video game awards and has been a fixture at Comic-Con since Chuck debuted. "Zac Levi's Nerd Machine was a great part of our CES All Access Live program, so we're excited to expand our relationship further," Jon Slusser, senior VP for sports and multiplatform programming at Spike TV, told THR. "With this partnership, our viewers will get to enjoy the fun and witty perspectives of Nerd Machine as they navigate through E3, Comic-Con and beyond." Following the cancellation of Chuck, the actor was in high demand but Let it Go, the pilot he starred in for FOX this year, wasn't picked up by the network and ABC, who expressed interest, have made no announcements since.