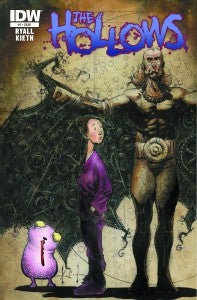 Earlier tonight, IDW announced The Hollows, a new miniseries written by Chris Ryall, best known for his work on IDW's Zombies vs. Robots, with art by Sam Kieth of The Maxx fame.

“The Hollows began as a more straightforward tale,” said Chris Ryall, also IDW’s Chief Creative Officer/Editor-in-Chief, in a press release, “until Sam and I remembered that neither of us really tell straightforward tales. So the desolate setting for the story is really just the backdrop for a more personal tale of love, loss, redemption, faith, flight, and past versus future, all wrapped up and bound to the archaic flying suit of our protagonist, a beleaguered scientist/explorer named Kobayashi who ventures down from his city-state and finds something entirely unexpected. Along with a little scene- and heart-stealing creature called Urp, too.”

The world it inhabits will look somewhat familiar to fans of Kieth's more out-there work like The Maxx and Zero Girl, as set against the backdrop of a decaying Japan in which survivors have built cities within gargantuan trees and travel via jet pack. Not just for the reason that jet packs are awesome, either--they need to travel by air in order to stay above the toxic radiation clouds that have rendered the ground unlivable. All of this seems uniquely suited to Kieth, of course, and while it's apparently been in the works for a while, the four-issue series will officially kick off in December.

“Well for me it was started visually... it stops short of having the heart of a true fantasy story, stops just shy of steampunk. It's soft sci-fi at best, and the ghostly hollows provide a bit of horror too,” said Kieth. “Reading over Chris's wonderful script, The Hollows seems to floats effortlessly through all of these genres. Maybe a cross between City of Lost Children and Brazil; hard to pigeonhole.”

Zombies Vs. Robots, The Maxx Creators Team Up For IDW Series