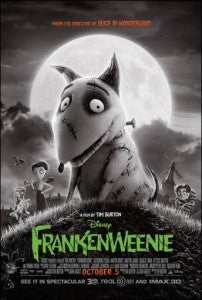 Walt Disney Studios has made a new trailer available today for Tim Burton's remake of his animated student film Frankenweenie. The story, which features a boy who uses pseudo-science to bring his beloved dog back from the dead, was originally a stop-motion animated short, and while it's now a major motion picture shot in 3D, one thing remains the same: Burton has elected to shoot it in glorious black and white. As opposed to previous teasers that played up Burton more than the movie itself and told viewers little about what the film would eventually be like, this trailer is a bit plot-intensive and a better primer for those who haven't seen the original. Check it out and let us know what you think!