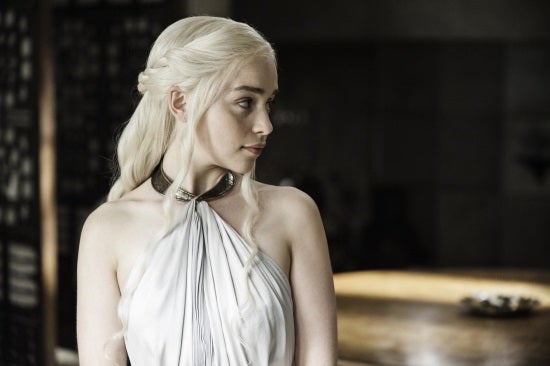 In a new "Behind the Episode" video released by HBO, Game of Thrones showrunners D.B. Weiss and David Benioff discuss the difficult choices and actions made by Daenerys, Bran Stark and Jon Snow in last night's episode, "First of His Name." For Daenerys, that decision was to rule in Meereen rather than invading King's Landing. "This scene shows Dany learning a lesson that I think all revolutionaries learned at one point or another," says Weiss, "which is that conquering, in many ways, is a whole lot easier than ruling." Meanwhile, Bran decided to remain hidden and continue his quest to find the Three-Eyed Raven rather than revealing himself to Jon Snow at Craster's Keep. "In the abstract, Bran's whole choice over the last season was between letting go of his past and grabbing on to a very uncertain future," explained Bran, "…I think that it's a much more stark instance of the choice that he has to make." Jon decided to burn Craster's Keep to the ground. "Burning Craster's Keep symbolizes Jon's desire to bring the Night's Watch back to some semblance of what it used to be and have it stand for something," says Weiss. Game of Thrones airs Sunday's at 9 PM ET on HBO.

Game Of Thrones Showrunners Talk About Tough Decisions For Dany, Bran And Jon In First Of His Name

PS5 Restock at Amazon Increases Your Odds of Buying the Console

My Hero Academia Spruces Up Its Villains in New Key Visuals