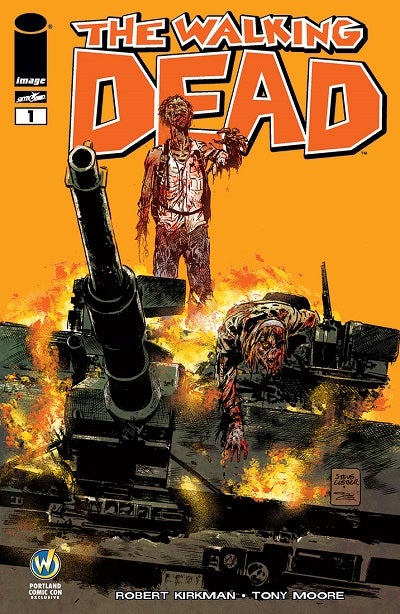 Wizard World and Image Comics have announced that full-price attendees to this year's Wizard World Portland Comic Con will receive a limited edition variant to The Walking Dead #1, illustrated by Steve Lieber.

The covers will be given to all full-price attendees upon registration at the Oregon Convention Center, while supplies last. Additionally, a black-and-white sketch edition of Lieber's variant will also be exclusively available to VIP attendees. Lieber's cover is the second in a year-long line of Walking Dead #1 variants made exclusively for Wizard World-produced comic conventions, which are held in various cities throughout the country.

Lieber, an award-winning artist and Portland resident, has worked on The Superior Foes of Spider-Man, Batman, and the Eisner-winning graphic novel Whiteout: Melt. Lieber will be available to sign the covers at the convention's Artist Ally.

"Having a local artist like Steve Lieber draw this excellent cover is a nice bonus for Wizard World Portland Comic Con fans," John Macaluso, Wizard World's CEO and President, said in a release. "His success as an Eisner Award winner shows in this design."