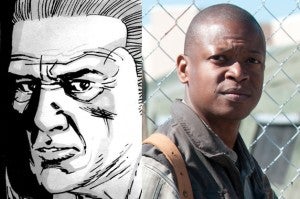 In Robert Kirkman and Charlie Adlard's Image/Skybound comic book series The Walking Dead, Bob Stookey was an older, white man whose history as an Army medic could have been in Vietnam or one of the smaller conflicts that took place during the Reagan Administration. Last night's episode of the AMC television adaptation of the series, though, reimagined the character as Lawrence Gilliard, Jr., a comparably-young, black actor best known for his appearances on the hit TV drama The Wire. It was The Wire that almost kept him from being cast--the producers are apparently sensitive to casting too many people from the series, which is one of Kirkman's favorites, and there's already a series regular on The Walking Dead who's very well known from The Wire (Tyreese, played by Chad L. Coleman). Gilliard had to be brought in by casting directors who were ignoring showrunner Scott Gimple's directions, and then he had to win everyone over with a pair of auditions, before he finally ended up with the gig. It's one of those rare cases where the race and age of a character changes, and fans are unlikely to complain since Bob was a fairly minor character and Gilliard is a good actor that many fans have a fondness for. Still, had he not been the one to get the job, it sounds from an Entertainment Weekly interview Gilliard did last night that it probably would have gone to somebody who looks more like Bob looked in the comics. "I was the first one to read, and it was three pages of a character they made up because they didn't want anyone to know it was going to be Bob Stookey," Gilliard said. "Very hush-hush. It was like three pages of just this guy talking. And I went in and I did it, and they were kind of just quiet when I was done. They were like, 'You know, that was really good.' I walked out, and I saw another guy sitting there, a white guy, older guy." Reminded what Bob looked like on the printed page, Gilliard said he didn't know that when he went into audition but has studied up since. Meanwhile, the fact that they were looking at other actors who more closely resembled the character's look from the comics is an interesting one; it suggests that it really was Gilliard personally that won them over, rather than that the showruners sat down and said, "Hey, let's make Bob a different guy."

The Walking Dead: Bob Was Almost an Old, White Guy