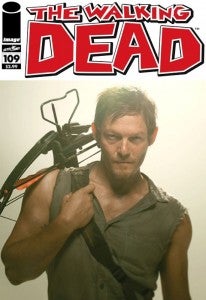 While Norman Reedus' character Daryl Dixon has emerged as one of the most popular characters on The Walking Dead TV series, the character has never appeared in The Walking Dead comic book series. During San Diego Comic-Con, Walking Dead creator Robert Kirkman was asked about the possibility of eventually putting Daryl Dixon in the comic books. Unfortunately, Robert Kirkman said that he likes the fact that certain characters are unique to certain mediums, and he has no plans to introduce Daryl Dixon in The Walking Dead comic book series. Comicbook.com recently caught up with Norman Reedus for an exclusive interview, which we'll be bringing readers more of this week. But here's one part of the interview to get things started. After telling Norman Reedus about Robert Kirkman's reluctance to add Daryl Dixon to the comics, we asked him what his thoughts were. Would he like to see Daryl in the comics? Or does he prefer Daryl as a TV only character? Norman Reedus said, "Of course I would love to be a part of the books and I've joked around with Robert [Kirkman] begging him to put me in, but he's the creator and really knows what's best for the stories. They are so intricate and vast I can't even wrap my head around what that's about really, to create such a unique world like that, so I'm following his lead. I'm really happy with where I'm at if you know what I mean." Norman Reedus will be appearing at The Walker Stalker Con in Atlanta, Georgia on Saturday, November 2.

The Walking Dead: Norman Reedus Has Begged Kirkman To Put Daryl In The Comics