Shattered Grid has already kicked off in epic fashion, but according to the cover of Power Rangers #29, things are going to get even crazier.

We've got your exclusive first look at the covers for Mighty Morphin Power Rangers #29, and this latest beauty from Jamal Campbell features even more Rangers, including the debut of the In Space Rangers and Dino Thunder Rangers.

As you can see up top, Andros and TJ are riding in on their Galaxy Gliders, while Kira rolls in on her Raptor Cycle. We've been waiting to see In Space make an appearance, so if you heard a high pitched yell recently you now know where it came from.

Oh, and you can also catch a nice debut from Dino Charge's Kendall Morgan next to Jen Scotts. They aren't the only Rangers showing up to help of course, as you can also see the RPM team (complete with Gem and Gemma), S.P.D. Rangers, Time Force, and of course Mighty Morphin.

"It's the penultimate month of POWER RANGERS: SHATTERED GRID and we're pulling out all the stops as the biggest Power Ranger battle you've ever seen in comics begins here," said Dafna Pleban, Editor, BOOM! Studios. "While that battle rages on, we'll see Kimberly literally confronting a dark version of herself in the Ranger Slayer – and that is going to end in a way no one can guess!" 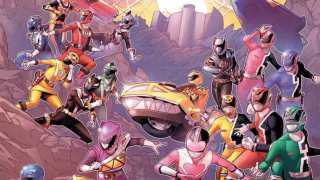 So yeah, things are insane, and you can get an idea of what's in store for the big issue in the official description below.

Mighty Morphin Power Rangers #29 is written by Kyle Higgins and drawn by Daniele Di Nicuolo with a cover by Jamal Campbell.

Print copies of Mighty Morphin Power Rangers #29 and Saban's Go Go Power Rangers #11 will be available for sale in July 2018 at local comic book shops (use comicshoplocator.com to find the one nearest you) or at the BOOM! Studios webstore. Digital copies can be purchased from content providers like comiXology, iBooks, Google Play, and the BOOM! Studios app.