The Power Rangers wouldn't be so iconic if not for equally fantastic villains, and Jaze Cosplay has recreated some of the best.

The Power Rangers have several iconic villains, but few come more iconic than Rita Repulsa. Jaze Cosplay (made up of Aime and Lance ) got some help from Lance's mother for an incredibly accurate Rita Repulsa complete with Green Candle and her trademark staff.

Rita isn't the only villain to join the proceedings though, as Aime pulls off a stunning Divatox from Power Rangers Turbo (the movie). In fact, Divatox lives up to her name with a lavish wallpaper photo with her name in glittering lights. If any villain can pull that off, it's Divatox. 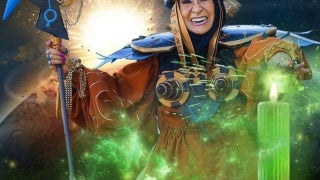 Aime isn't done though and decides to step into the many looks of Power Rangers In Space villain Astronema. The Purple hair and short hair versions are both represented, but the photo featuring the villain on a lavish throne has to be the best. the throne was created by OtsillaC Prop N Stuff.

Not content to attack the Rangers alone, Astronema calls in the Silver Psycho Ranger, who is played by Lance . The suit looks incredible, and after that photo, we can't be the only ones who want to see a real version of The Adventures of Astronema & Psycho Silver, right?

It's hard to top those two, but they managed to anyway thanks to several photos featuring all six of the Psycho Rangers. Black, Red, Yellow, Silver, Blue, and Pink are all accounted for, and it appears that the Rangers' world just got way more complicated.

You can view a few photos above, and the rest can be located in the gallery.

You can also find OtsillaC Prop N Stuff on Facebook.