The journey towards Shattered Grid continues, but the stars of the show are still the Rangers themselves.

Slight spoilers incoming for Mighty Morphin Power Rangers #22, so if you haven't read the issue yet you've been warned.

Mighty Morphin Power Rangers specializes in the fantastical, but issue #22 is yet another example of writer Kyle Higgins finding ways to integrate larger than life elements into grounded character narratives. In issue #22 alone you've got evil wizards, disturbing monster makers, and brightly colored Rangers, but holding it all together is a story about trust, family, and evolving relationships. 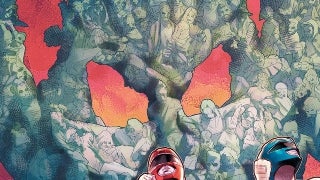 That trust comes into play thanks to the return of Zordon to the fold, which happened at the end of the last issue. Since his unexpected disappearance, the Rangers have learned quite a bit about their legacy and Zordon's past decisions, and they don't necessarily agree with them.

What stands out though is the genuine nature of their conversation about these recently revealed truths. It's not played in a melodramatic fashion, and they have a rather honest and frank conversation that is more based on confusion rather than anger. They're upset with being kept in the dark out of the tropes of concern or safety, and it seems their words have .

In fact, Zordon has been of the series biggest strengths. Higgins has taken him from a never-failing moral compass to a flawed being who has the best of intentions. He's right more than not of course, but making him fallible makes the dynamic between him and the Rangers much more interesting.

The series has received another jolt though in the form of Grace Sterling, who continues to captivate with every conversation she's in. Sterling's more proactive approach further divulges aspects of all the Ranger's personalities. She has a unique perspective that challenges the Rangers' preconceived notions about being a Ranger and what being a hero means, and that will only lead to more interesting avenues story and plot-wise.

Now, some might take issue with the lack of movement on a macro story level here. This issue is one full of amazing character moments and dialogue, but aside from one tease, it doesn't really move this Finster's story forward much at all. If that's your main focus, then you might leave somewhat disappointed.

As for the art, Jonas Scharf and Joana deliver some lovely visuals, starting with that pitch-perfect opening sequence. Despite the isolation of that initial location, a transfixing palette of purple, browns, and grey make you want to explore it further, and despite the brighter elements of later scenes, the pair elicits a genuine feeling of tension thanks to their expert shadow work. The rendering of the characters themselves can be a bit wonky at times, but it isn't enough to take away from the positive aspects of the book.

Mighty Morphin Power Rangers #22 delivers everything you expect from the series but also continues to find new layers to these iconic characters. If you've been waiting to jump on, there's no better time than now.