In an unprecedented move, the Star Trek: Discovery comic book will be co-written by Kirsten Beyer, one of the writers on the Discovery television series as well as the author of several Star Trek novels. She'll be joined by Mike Johnson, the writer of IDW's ongoing Star Trek series, and artist Tony Shasteen, who has worked with Johnson on Star Trek previously.

ComicBook.com spoke to Beyer and Johnson about why Star Trek: Discovery fans should be excited about the new comic book series. 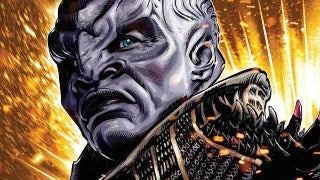 ComicBook.com: What is the story you’re looking to tell in the Star Trek: Discovery comic book?

Kirsten Beyer: We are always looking for stories that flesh out the characters of the Discovery series in ways that the television show may not have time to do. The stories are meant to stand on their own as thrilling adventures, while simultaneously going deeper into events or individuals and provide real insights that support and enrich the show for the fans.

Mike Johnson: To that end, this first series focuses on the backstory of the Klingons we met on the show, specifically T'Kuvma. His journey from childhood to Klingon leader is the heart of the story.

Why did you choose to have the comic focus on the Klingons?

KB: This was a no-brainer for the first series of comics. The show has reimagined so many aspects of the Klingons, beginning, of course, with their look and aesthetic. We wanted to give readers a sense of who these Klingons are and how they are connected to the many versions of Klingons presented in the past. Beyond that, we wanted to offer the readers a deep dive into the character of T’Kuvma who is responsible for setting the Klingons on the course that leads to the disastrous confrontation at the Battle of the Binary Stars. His story is steeped in what long-time fans will think of as “traditional” Klingon history. But his story is also unique and deeply personal. For readers curious to understand why the Klingons T’Kuvma leads carry their dead with them, or how the teachings of Kahless inform T’Kuvma’s mission to reunite his people, or how the Klingons of this era view the Federation, this is the place to find those answers.

KB: One of the biggest questions hanging over the series is, "How did we get here?" We know about Klingon first contact and early conflicts prior to the founding of the Federation. And we know that within moments of Kirk’s Enterprise encountering the Klingons at , we are at war with them. But the middle of that story has never been told. The show tells this story primarily from the point of view of Starfleet. By telling the story of the events that motivated T’Kuvma, we hope to expand the readers’ understanding of the conflict and place it in a richer context.

MJ: We did something similar with the Romulan character Nero back when the 2009 Star Trek movie came out. Fans who saw the movie (spoiler alert) knew Nero died, but they still picked up our Countdown and Nero miniseries because they wanted to know more about the character.

One of the other characters present in the first issue, at least in the frame story, is Voq, who is an albino Klingon. Without giving too much away, there are some other albino Klingons in the story as well. How much will reveal about the albinos’ status in Klingon culture and society?

KB: One of the ways in which the showrunners wanted to expand our understanding of the Klingons was to move beyond presenting them as a monolithic culture. It only seemed logical that there would be as wide a variety in Klingon pigmentation as there is in human flesh color. Once that choice was made, it begins to raise predictable questions. Do Klingons view these differences as significant? Humans of the 23rd century have moved beyond such notions. T’Kuvma makes it clear in the series that some Klingons have not. Voq’s origin is as significant to the story as T’Kuvma’s and the ways in which their past and present intertwine is one of many issues this series will reveal.

In working with artist Tony Shasteen, what are your goals when it comes to trying to balance the look of the Discovery television series with what’s possible in comic book form?

MJ: It's a tricky challenge, but there is nobody better suited to the job than Tony. His style lends itself to both the grandeur and the intricate detail we see in the show, particularly when it comes to the Klingons and the Ship of the Dead. Tony has tons of experience in the Kelvin universe interpreting live action characters and settings in the comics format, and he continues his stellar work here.

It’s been noted by critics and fans alike that Discovery has a unique look, storytelling style, and tone from past Star Trek series. You’ve both worked on other Star Trek properties. How does your experience working on Discovery so far compare?

KB: Working on Discovery is incredibly challenging because no assumptions go unquestioned. Everything is being imagined from the ground up and watching it come to life as hundreds of artists bring their vision and talents to the creative process is simply thrilling. Every property has its own unique obstacles. Finding story in the landscape of the more well-established series and time periods can often be difficult. With Discovery, there is simply no end to the story possibilities. If anything, limiting ourselves to stories that will fit into the space the comics allow might be one of the most difficult parts.

While Mike has been working on the ongoing Kelvin Timeline movies, unless I'm mistaken, this is the first time that either of you has been working on a story that ties into a currently airing (or streaming, as the case may be) Trek TV series. How has that affected the creative process and what your goals are for your stories?

KB: The challenge here is to make sure that the story we are telling continues to track with the story that is evolving in the writer’s room every day. Comics require a great deal of lead time but even as we are writing our scripts and the artists are beginning their work, is evolving for the series and everything we do has to line up with those constant changes. We do our best to choose stories that it is unlikely the series will touch on in greater depth in the future, but it is the nature of this beast that this could change at any time and we simply have to roll with it. Bottom line, we knew the job was dangerous when we accepted it.

MJ: It's been a challenge but a joy, mainly because Kirsten is such a wonderful collaborator. It's also invaluable to have one of the comics' writers be a writer on the show itself because we can make sure everything lines up between the two.

I assume there may be some plans already in the works, but do either of you have a wishlist of other characters from Discovery that you’d like to put the spotlight on in comic book form and explore their history? Who is at the top?

KB: We’ve barely begun to scratch the surface of Discovery’s main characters and each of them has history and relationships and special interests that are waiting to be explored. Eventually, we’d like to spotlight each of them but finding the right time and the right story as the show continues to develop is critical.

Are there any last teases you’d like to leave fans with?