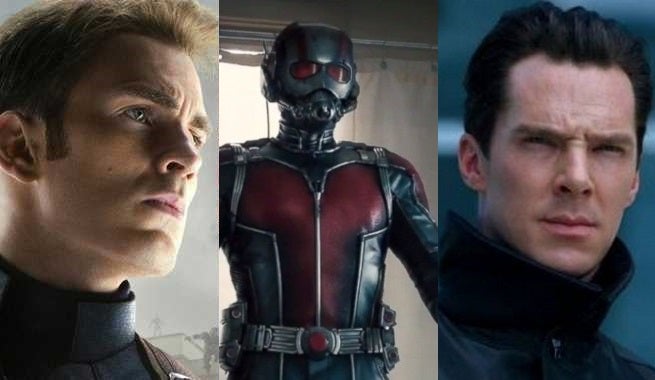 Several new, unconfirmed rumors concerning Marvel’s Ant-Man, Captain America: Civil War, and Doctor Strange movies have appeared online. Some of them are quite spoilery, so be warned before reading ahead.

The report comes from JoBLo, and starts with details about what to expect from Ant-Man. According to the report, there will be two fights between Ant-Man and Yellowjacket. The first will be inside of a suitcase that’s falling out of a helicopter, and will involve them maneuvering around the various objects inside of that suitcase, like a smart phone. The second will be the finale fight in Cassie Lang’s bedroom, where the shrinking/growing technology will be used to shrink the hero and villain, but also enlarge an ant and the Thomas the Tank Engine toy to giant-sized proportions.

The report also says that Hope Van Dyne will eventually become the Wasp, just not in Ant-Man.

On to Captain America: Civil War, which, according to the report, is being referred to simply as Civil War in-house. The movie will feature a long list of heroes, including: Captain America, Black Widow, Hawkeye, and Falcon on one side of the conflict, and Iron Man, War Machine, The Vision, and Ant-Man on the other. The Scarlet Witch is also expected to be involved, though which side she’s playing on is unclear. The Black Panther is also making his debut, but will be serving his own purposes and is not filling in the Spider-Man role left open from the comics. As for Spider-Man himself, Marvel is still keeping his involvement, or non-involvement, held tightly under wraps.

Now let’s talk fashion. The Falcon will be sporting a modified costume, with a red and grey color scheme similar to his comic book look. Cap’s costume will resemble the one he’s wearing in Avengers: Age of Ultron. Ant-Man will look about like what we’ve seen, but you can expect him to go Giant-Man mode at some point in Civil War.

As far as villains go, Baran Zemo will be appearing, and Brock Rumlow will be making the transition to his Crossbones persona from the comics, including a modified version of his skull mask that’s a bit more like a mask-helmet hybrid with skull graffiti. Crossbones will be responsible for causing the massacre that leads to the Superhero Registration Act that fuels the conflict, but the real contention between Tony Stark and Steve Rogers will come from discussions about the Winter Soldier, who will also be appearing in the movie.

And finally, some bits of Doctor Strange news. The report says that Strange’s look for the movie will be directly inspired by the comics, and includes his red cape. The suit will be modified to fit into the Marvel Cinematic Universe, with a shorter collar and some kind of vest.

Strange will go up against both Dormammu and Baron Mordo in the film. Dormammu will be leading an army of Mindless Ones, and a lot of the action will take place in-between dimensions and in the Astral Plane, with visuals comparable to Inception.