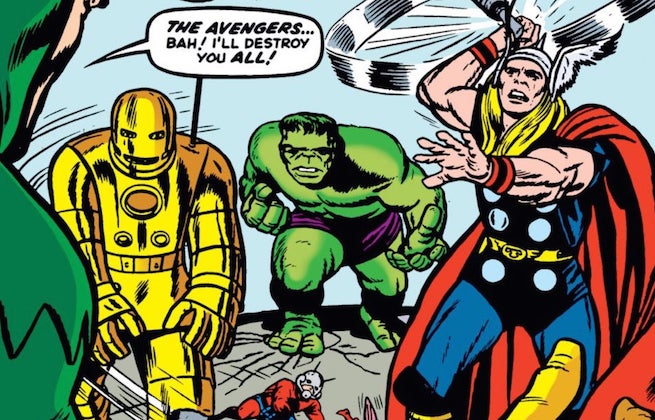 In the Silver Age, the Avengers weren’t just Earth’s mightiest heroes — they were also the planet’s goofiest.

The Stan Lee/Jack Kirby run on The Avengers is well known and loved for many memorable moments — the Silver Age resurrection of Captain America, the team’s first fight against Loki, and the drawn of the “Cap’s Kooky Quartet” era. But the early 60s were also a time of heroes dressing as clowns, inappropriate horseplay and Cap getting just a wee bit too emotional over an unanswered letter from Nick Fury.

So for this next installment of Silver Age Silliness, enjoy these five sublime moments from the early days of the Avengers — years before androids could cry and cyborgs could kill. 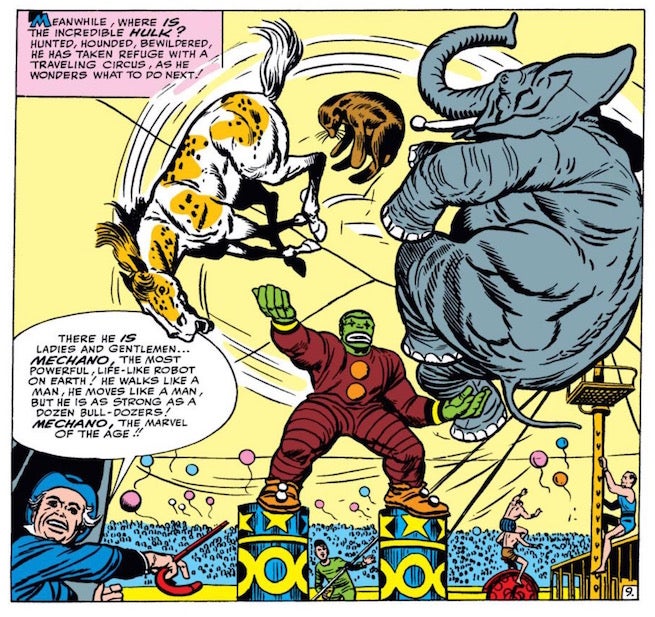 1. Send in the (Terrifying) Clowns

Yes, in the very first issue of The Avengers, Lee and Kirby decided to terrify readers with the unholy alliance of the big green menace and the unsettling circus (sorry kids, clowns are scary). After Loki tricks the newly formed team of heroes into thinking the Hulk has destroyed a set of train tracks, the misunderstood monster goes into hiding by joining up with the local circus … like you do. The ringmaster (not the mind-controlling villain; just the guy leading the show) promotes the poorly disguised Hulk as the most powerful robot on Earth! It’s never made clear whether or not the circus knew it was hiring the Hulk, or if Hulk managed to trick them into thinking he was a lifelike robot capable of juggling large animals. Either way, this is not only one of the silliest Avengers moments ever, but one of the most absurd Marvel moments ever. 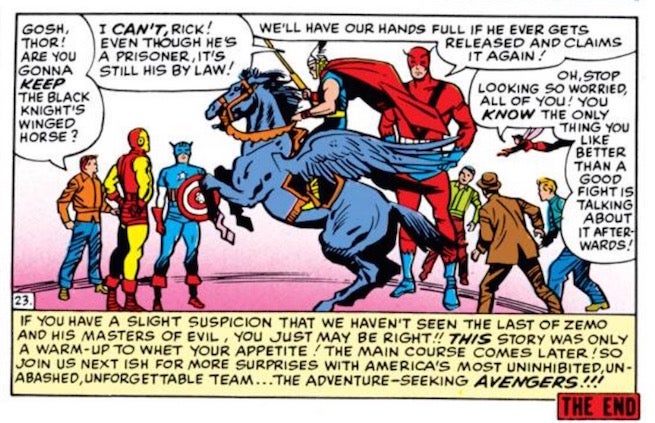 There’s just something irresistible about big guys with long flowing golden locks riding a horse. Lee and Kirby inadvertently provided some inspiration for drug store paperback romance novels when they ended this issue of The Avengers with a corny shot of Thor stuck on top of the Black Knight’s horse. The team had just scored a victory against the newly formed Masters of Evil. Nothing against excessive celebration, but there’s just something about freezing this moment in time that smacks of goofiness. Maybe if Kirby was given a full page spread to provide some artistic detail to the image, but instead it’s just a group of tiny heroes standing around watching Thor sit awkwardly on a winged horse.

3. Thor Can Do What With His Hammer Now?

Sure, the famed Mjolnir has been classified as a “magic hammer” by some, but at what point in Marvel history did it gain the power to break through the fabric of space and time and create a warp hole? Apparently in the seventh issue of the Avengers. Now, it’s understood that there’s a certain amount of disbelief to be suspended while reading superhero comics. Thor is pretty much a god walking among men who can use his hammer to control the elements and fly. But when he uses it to teleport a plane filled with the Masters of Evil to parts unknown, that’s not even fair. If teleportation is part of his arsenal — and Marvel would occasionally revisit this power in the future but not with any kind of true consistency — are there any limits to Thor’s abilities? 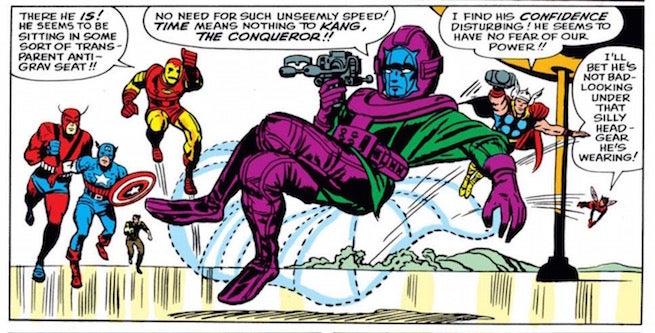 In addition to conquering worlds, classic Avengers villain Kang is apparently adept at conquering the hearts of ladies. In Kang’s very first appearance, he goads “Earth’s Mightiest Heroes” with his cocky attitude and arrogant ways about him. Thor finds his confidence disturbing, but Janet, who was mostly used as comic relief in these early Avengers issues, wagers that the time traveling warrior is probably a good looking dude underneath the silly mask. Nothing captures the tension of a moment better like wondering what the guy who’s trying to kill you looks like underneath his mask.

Just because Captain America is is Marvel’s most noble hero doesn’t mean he’s above showing his more sensitive side from time to time. In one of the most bizarre ongoing subplots in Avengers history, Cap gets down on himself because he thinks his life lacks purpose, so he petitions Nick Fury — in a politely worded, handwritten letter — for a post in S.H.I.E.L.D. When Cap’s requests go unanswered, he becomes moody and petulant, debating all the ways he could demonstrate his physical prowess and impress Fury. When Cap finally gets a response from Fury (it’s actually Baron Zemo pretending to be the S.H.I.E.L.D. director), his reaction is disproportionately jubilant. “He wants me” he cries out in celebration. OK, Cap, but maybe you should calm down a little bit here. It’s a position in S.H.I.E.L.D., not the winning lottery ticket.