The "Tournament of Power Arc" that ended Dragon Ball Super saw Vegeta tap into his Saiyan Pride in the battle against Jiren, unlocking a new form that's tentatively referred to as "Super Saiyan Blue Evolution" or "Super Saiyan Beyond Blue." However, we barely got a moment ot witness the power of SSBB before Vegeta was knocked at the tournament altogether. That's left fans with some big questions about SSBB - and how that transformation relates to Goku's Ultra Instinct power-up. Here's what Ishitani had to say about the subject:

"Vegeta's evolved version of Blue is an anime original. Like you said, that form is the result of him mastering his strength in a different way than Goku. Strength-wise please think of it as about the same as Goku's Blue Kaio-Ken." 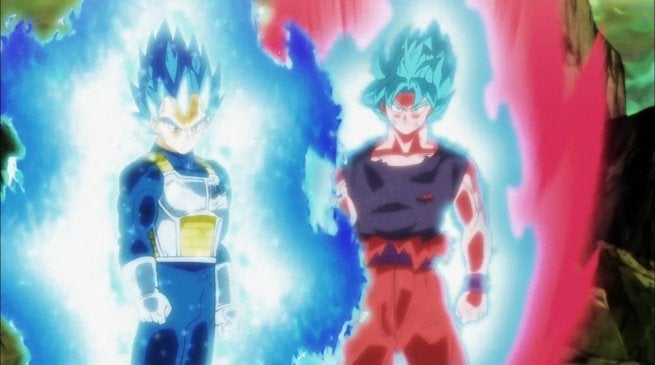 So there you have it: according to Ishitani, Vegeta's SSBB is on par with Goku's SSB with a Kaio-Ken boost. Of course that answer will probably invite more questions, as a lot of fans don't consider Kaio-Ken to be a power-level in and of itself. The technique is actually a power multiplier, so when talking how powerful Goku is while using Kaio-Ken, we'd need to know exactly what numeral of multiplier he's using. So is SSBB as strong as SSBKKx10? Or as strong as SSBKKx20? It's still pretty unclear.

Indeed, a lot of fans have been wondering if Vegeta's SSBB will become the next Dragon Ball transformation that will fall through the cracks as a gimmicky power-up that never really showed all that much depth or importance in the larger scope of the series. Dragon Ball Z saw its Super Saiyan transformation spiral out into an arbitrary series of numbered progressions. Yet, while SSJ3 and SSJ4 certainly had their moments in DBZ and DBGT, there was a pretty big gap in truly meaningful transformations, stretching from SSJ2 to DBS's introduction of divine powers like Super Saiyan God and Super Saiyan Blue. That's all to say: with Vegeta's Ultra Instinct power-up still a big possibility, there's a good chance that SSBB could end up being a flash in the pan.

Dragon Ball Super: Broly will hit Japanese theaters in December, and is expected to arrive in the U.S. around mid-January 2019. Dragon Ball Super is currently airing its English dub on Adult Swim during the Toonami programming block Saturday evenings at 9:30 p.m. ET. It is also available to stream on Funimation and Amazon Video. The Japanese language release of the series is complete and available to stream on Funimation, VRV and Crunchyroll.