Comic book ads have taken a dramatic shift over the past several years. Gone are the days of ads for TV star posters, bubble gum and various and sundry gimmick products. Most ads in comic books today are for video games, cartoons, other comic book titles or film adaptations of comics. If you find yourself pining for the days of offers promising an exciting product in exchange for a couple of dollars or products that were advertised in comics that would cause alarm today, take a stroll with us down memory lane and examine these ten classic products from comic books of the past, in no particular order. 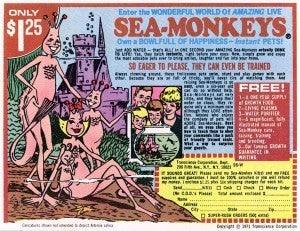 Sea Monkeys Perhaps one of the more unusual and intriguing products ever sold in comic books, Sea Monkeys, actually a very specific species of brine shrimp, have been around as a commodity since 1950. With their friendly Sea Monkey family happily lounging in front of their castle, their ads encouraged us to try our hand at raising an aquatic ecosystem with water, growth food and a bizarre set of "living plasma". They're still sold today, but this smiling, waving oddity has vanished from the pages of comic books. 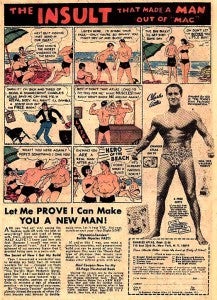 Ads for Muscle and Body Building Considering the number of ads in comics promising muscle mass and strength, Charles Atlas and company must have thought most comic book readers 98-pound weaklings. The innumerable ads, many promising results in a matter of days, were everywhere in comics for years, ran the gamut of techniques. From Atlas' "dynamic tension", to Mike Marvel's Scientific Isometrics, consumers had their choice of ways in which to achieve maximum pumpage with minimum time commitment. 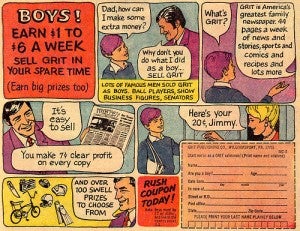 Grit Newspaper Poor, literally, non-Grit saleschildren. Multiple ads for this over 120 year old newspaper turned magazine depicted little souls without cash, unable to partake in the fun their friends were having at the amusement park. Selling Grit, which practically sold itself according to the ads, would guarantee kids either cash payments or they could receive prizes of all sorts. While Grit is still sold today, it was once an introduction into free enterprise for young kids looking for a way to treat the gang to a burger.

Hostess Snack Cakes Ah, Hostess Snack Cakes. Remember the good ole' days when all it took to stop Lex Luthor from taking over the city was a Twinkie? Or how about that time Spider-Man thwarted Doc Ock by simply distracting him with a Ding Dong? Hostess Snack Cakes still exist on grocery store shelves, their ads in comics forgotten. I challenge you though to pick up virtually any mainstream comic book from the late 70's-mid 80's that didn't include an ad for one of these sugary, but oh so delicious, crimebusters!

Dingo Boots Perhaps the biggest reason that this ad stands out today is due to the fact that its spokesperson, O.J. Simpson, doesn't quite have the same appeal to kids today as he did when he endorsed this product during his football heydays. Dingo Boots are known for their authentic, sturdy leather and Western appeal. Using O.J.'s appeal in their ads was a genius move, and the promise of the autographed picture of the Juice certainly helped sell some shoes! 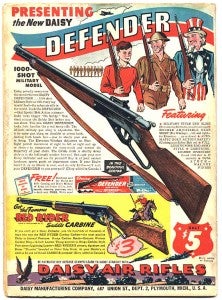 Air Rifles It seemed like a good idea at the time. Companies Daisy and Crosman were certainly the two biggest companies that published ads in comics, featuring happy children learning to use their pump action bb guns, under the watchful eye of an adult, usually festooned by a cowboy hat. It would be hard to imagine DC or Marvel running ads with these products today, but for nostalgia's sake, it's certainly interesting to revisit.

Toy Soldier Sets Go to any toy store today and try to see how far $1.75-$1.98 will go. For a good portion of the Bronze Age, that was all the dough you needed to get your own squadron of toy soldiers! You could have Roman fighters, Army men, Civil War soldiers, all in sets of at least 100! A great service these ads provided was in listing specifically what inventory you were getting, everything from tanks to archers!

Aurora Hobby Kits If you wanted a way to build a Frankenstein monster to play with your model Batmobile, you could find both through Aurora. The company, known for its model kits of, well, everything, was a stable advertiser in comic books for years. Superheoes, movie monsters, animals, science-fiction robots and cars were among their more popular offerings, with these kits now a collectible commodity. A relaunch of some of the kits was rumored, but sadly, nothing has come to fruition at this time.

Mego Action Figures The world's greatest superheroes helped make Mego a memorable company in the 1970's. Their ads for their line of 8-inch figures were everywhere in the pages of DC and Marvel, and the toys were widely popular. Ads in comics were used to both tease us with future releases of popular characters and to encourage us to run out to stores to pick up Shazam, Batgirl, Iron Man and the Green Goblin. Sadly the company folded in the early 80's, but the toys, and the comic books featuring their ads, live on. 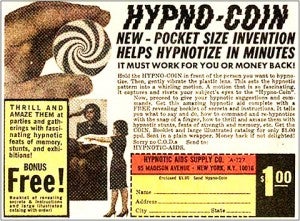 X-Ray Glasses, Spy-Pens, Etc. How could I do this list without including, of course, the classic and ever-present ads for various novelties such as X-Ray glasses and sneezing powder. Offered at dirt cheap prices, these products would be featured in typically half to full page ads, with type that was often microscopic. When you think about it though, how much of a sales pitch do you have to have to buy a whoopie cushion for under $2.00. While some of the gadgets have fallen away, mostly over the years, such as 3-D glasses, others are still around, however their comic book presence has sadly waned.

Deadpool Creator Doesn't Know How a Spider-Man Crossover Could Happen

The Brock Lesnar Bar Story That You Have To Hear

Call of Duty: Modern Warfare 3 Remastered Reportedly in the Works