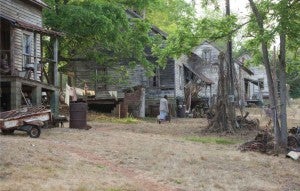 Don't be surprised if Lionsgate themselves buy this up, just for convenience's sake: Henry River Mill Village near Hildebran, North Carolina--the abandoned village that served as proxy for Katniss's home of District 12 in the blockbuster screen adaptation of Suzanne Collins' bestselling novel The Hunger Games, is up for sale.

The asking price is $1.4 million, which sounds like a lot until you consider that virtually anything you find there can be sold off as a "screen-used prop" if the village were to be bought be someone into cinema collectibles.

The area, which has been mostly vacant since the mill that powered the village burned down in 1977, has turned into a tourist attraction since the movie was filmed there and, according to a story by The Associated Press, the current owner is overwhelmed by the response. "I'm getting too many visitors," said Wade Shepherd, 83. "Day and night, they're driving through, taking pictures, getting out and walking. I'm just bombarded with people."

Legends of Tomorrow: Who Is Behrad?

Arrow Recap With Spoilers: Welcome to the New Star City 2040 in "Green Arrow and The Canaries"