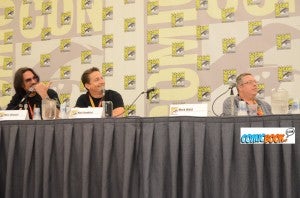 Matt Hawkins hosted a Top Cow Panel at San Diego Comic-Con International today. The show began with a music video by the band September Morning, and segued into a discussion about the publisher's work that featured Ron Marz, Marc Silvestri and Hawkins. The video will debut soon on Spike TV during TNA Wrestling.

"Now you know why the books are all late," joked Silvestri when they couldn't figure out the projection system for the music video. The video comes from a project being written by David Hine, who is "brutal, insane" and safely away on vacation in France, according to Silvestri. The project begins shooting within a month in cooperation with MTV Geek and goes "all the way through comics, Internet, music, live performances, Twitter, Facebook" but "not MySpace anymore."

"This is a year for Top Cow to do crazy experiments," Hawkins explained when he introduced Manifestations, a new, original graphic novel that will be available digitally soon for $4.99. The book, by Rafaelle Ienco, will also be simultaneously released as an independent film.

Hawkins and Silvestri made a video presentation talking about their Kickstarter program for Cyberforce. It's different from most Kickstarter campaigns, they say, because the book will be free when it's fully funded. If they make more than the $75,000 that they're asking for the first five issues, they will continue to distribute

The idea is to get non-comics readers to pick up "five, high-quality free comic books" and hopefully build a relationship between those readers and their local comic book stores. Silvestri likens the program to public television, where fans can make a contribution because they want to support what they consider a good program, even if it is free.

The free copies will be physical, with no plans yet for digital distribution, although the comic will be uploaded to torrent sites and fans will be encouraged to share them that way.

The comic itself will be written by Marc Silvestri, who will also draw the covers, with interior art by Koi Pham, although Silvestri said that he will also be doing some interiors, "which we will keep as a surprise," but which fans can buy on Kickstarter.

"The goal of this is that we're trying to get the people who used to buy comics in the nineties to possibly come back and try it again, and with the rebirth of the Top Cow Universe it gives us an unparalleled opportunity to bring it back and try this again," Hawkins said, explaining that Cyberforce sold over 100 million copies in the 1990s and so obviously there's interest.

Christos Gage, who writes Sunset for the publisher, joined the panel. His book is the first original graphic novel in Top Cow's history, and revolves a retired criminal who made off with his boss's fortune--and now is being pursued at the age of 77.

"We have the worst business model ever," joked Silvestri after Hawkins told fans that the $1 preview book for Sunset would be given away for free.

Todd Lieberman and David Manpearl were in the room, revealing that Total Recall and Underworld writer Wiseman will be joining The Darkness film, which they hope to get in production soon.

"We could have had a lot of stuff out, including a Witchblade movie, three or four years ago, but it would have sucked," said Hawkins with regard to the wait on The Darkness.

"First and foremost we're going to do right by these gentlemen and by you," Manpearl told the fans.

"The movie is going to be even more kick-ass than the games," promised Silvestri. "We have no interest in screwing our franchises. We're going to wait until we have the best script we can and make that movie."

"Artifacts is the book where we can explore the other corners of the Top Cow Universe that Jackie and Sara aren't inhabiting--where we can put characters like The Angellus front-and-center for a couple of issues and then move onto another story with the Heartstone Bearer or Tom Judge," explains Marz of his series, which moved from a 12-issue maxiseries to an ongoing when Top Cow was reborn earlier this year. "We've got a vast playing field, so we can do epic, crazy stuff with angels and demons and then we can do a hospital drama for an issue."

CyberForce does take place in the Top Cow Universe, Hawkins said, but at least for the first year it won't interact with the other titles. That's part of a business plan by the company that Marz describes as "If we do our jobs properly, if you read the books separately they stand separately but if you read them together it creates a richer tapestry."

Mark Waid joined the panel, announcing that Top Cow will be bringing its Pilot Season series to Thrillbent, Waid's free digital comics site. Hawkins explained that the print sales were not covering the cost of publishing the books, and so they've decided to make Pilot Season part of the Thrillbent site. They're still working out the system for voting on properties online, but it's essentially the same program--an American Idol-style voting system. Instead of releasing an issue at a time, though, the digital format allows them to be more fully-formed stories, and the second round of the contest will see additional content added to the stories that move on.

"It's more important for us to bring eyes to the page, becuase people who like it will tweet about it and talk about it," explained Waid. "You make everyone who comes to Thrillbent feel like they're part of something."

Heroes & Villains joined the stage, announcing that Tracker--the Atlas Comics book by Jonathan Lincoln and Francis Teal-is being developed as a film and will be going to studios soon. Epoch, meanwhile, will also be coming to film by Imagine Entertainment in cooperation with Top Cow and Heroes & Villains. They also announced Bushido: Way of the Warrior, which  will be a comic about samurai fighting vampires in feudal Japan. The film is being co-developed as a feature film produced by Adam Stone.

"I love the guys at Top Cow and have been looking for something to do with them for a long time," Stone said, "and the Heroes & Villains guys finally brought me the right one."

The panel concluded with a trailer for the comic book, written by Rob Levin with art by SKAN, which we'll try to get posted soon.