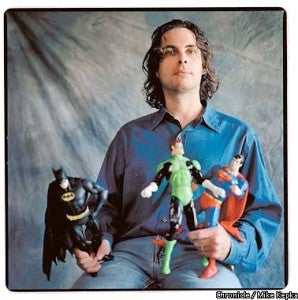 , an hour-long drama pilot from best-selling author Michael Chabon and his wife Ayelet Waldman, was not picked up by HBO, The Wrap reports.

Much of Chabon's work has to do with the Jewish experience in one form or another, and this was no exception; the story revolves around a group of magicians who form a band to stand up against Hitler's regime during World War II. Darren Aranofsky was, at one point, attached to direct the pilot but departed before it got off the ground.

Chabon, in addition to writing The Escapist for Dark Horse Comics, penned the comics-centric novel The Amazing Adventures of Kavalier and Clay, which drew its inspiration from the early history of the American comics industry. It was in that novel that he introduced The Escapist, the superhero comic-within-the-novel.

The writer, whose Wonder Boys and Mysteries of Pittsburgh have been adapted to film and whose The Yiddish Policemen's Union is currently in development, has also done work, often uncredited, on properties like Sam Raimi's Spider-Man and Andrew Stanton's John Carter.

The Wrap also claims there's an outside chance the project could find a new home for itself at FX, who are looking for projects as their original series Anger Management got off to a great start but has leveled out. The cable network still hasn't quite made up the ground it lost in original programming when both The Shield and Rescue Me went off the air.

Michael Chabon Series Not Picked Up at HBO - Headed to FX?

WWE Celebrates R-Truth's Birthday With Compilation of His Funniest Moments