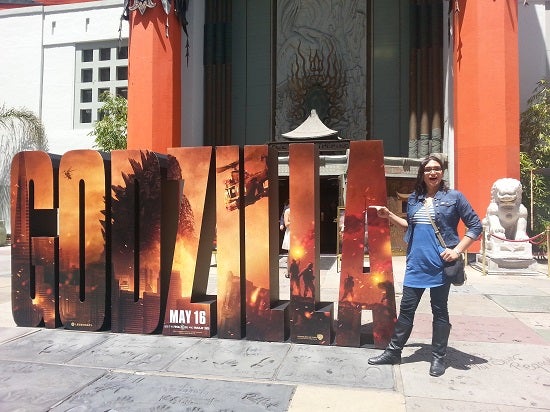 Two women went to see the newest Godzilla movie together. One is a diehard Godzilla fan. The other, while a fan of monster movies, had never seen a Godzilla movie before. And both walked out with the same reaction.

They both loved it.

Screenwriters Max Borenstein and Dave Callaham and director Gareth Edwards achieved the near impossible, they made a Godzilla movie that both delights old fans while drawing in new ones.

With the exception of the character of Dr. Ichiro Serizawa, played by Ken Watanabe, there are few references to the original films. Instead, they allow the references to nuclear energy and bombs be the tribute to the Godzilla films of the 1950s, 60s, and 70s. And of course, there are several obligatory yet exciting shots of people running through the streets from the fierce monsters that rose out of the ocean.

The plot is simple and fun, rounded out by a very talented cast. The only real hitches were with the character of Ford Brody, played by Kick-Ass and Avengers: Age of Ultron star Aaron Taylor-Johnson. While Brody is heroic and tragic enough to be a likable protagonist, it would have been interesting to see him face more of a struggle between his duty and his family.And there were moments when his presence as a bomb technician for the military was a tad convenient, even for a monster movie.

Those flaws are easy to forgive in the face of his performance however. Elizabeth Olsen (who plays his sister in Age of Ultron) as his wife, Bryan Cranston as his father, David Strathairn as the Admiral in charge of saving the world and Ken Watanabe as Dr. Serizawa are all consistent and solid performers giving it their all.

In terms of a high stakes monster movie, Godzilla got everything right. No one is safe, no matter how famous the actor playing them is. The build up to seeing Godzilla is suspenseful and worth the wait. The fighting scenes between Godzilla and his fellow monsters are glorious. The movie is well paced and a lot of fun.

At the start of the film, only one of these two women was a Godzilla fan. By the end of it, we both were.

Godzilla Delights Old Fans While Drawing In New Ones [Review]

U.S Space Force Issues Statement That the Origin of Their Seal Is Not Star Trek