AfterShock Comics is publishing its first anthology collection, and they've assembled some stellar talent to kick things off.

“My story, Blooderflies, is a horror/dark fantasy yarn that tells a complete story in just 8 pages, but it should keep readers thinking about the setting and "what happens next" for some time to come," Bunn said. "To me, that's part of what makes AfterShock's catalog so thrilling. These stories, short or long, really fire the imagination. I couldn't be happier to be included alongside these amazing creators.” 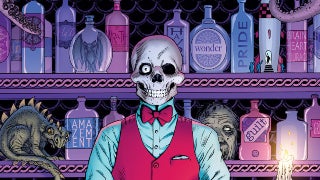 Marc Guggenheim's story is called , and he's been waiting to get to it for quite awhile. “is an idea that’s been burning a hole in my notebook for years: What if cities could fight like people? It’s the kind of huge, visually-driven idea that could only be done in comics," Guggenheim said. "My story centers on a clash between New York City and Chicago and I couldn’t be more excited about getting this crazy, bombastic concept out into the world.”

Mike Carey decided to go in a more non-fiction direction. “My story in the anthology is an autobiographical piece about growing up in Liverpool in the middle of the last century, a time that in some ways feels as distant as the late Jurassic," Carey said. "I'm trying to make sense of the disconnect between the world I knew as a kid and the world I live in now. It's also a story about the way memories work, and the way we constantly try to build a coherent narrative out of the incoherent facts of our lives. I've slipped biographical details into stories before but I've never written a fully autobiographical story. I'm excited to see how it comes out, not least because Szymon Kudranski is doing the art and I can't wait to see how my life looks in his gorgeous black and white palette.”

The SHOCK anthology will have a bit of everything, including a crazy Red Riding Hoot Tarantino mash-up from Frank Tieri.

“My story is called, Little Red Hood, and you can think of it as basically Little Red Riding Hood as if it was a Quentin Tarantino movie," Tieri said. "The familiar fairy tale is instead set up as a big drug deal gone horribly wrong. So in our case, Red is a drug courier delivering a package to the biggest drug dealer in town-- that being Grandma-- and then rival drug dealer "the Wolf" arrives and everything hits the fan. It's over the top, ultra-violent and very much not the beloved Brothers Grimm yarn we all grew up with. So yeah, this ain't a story you'll be reading to your kids anytime soon. Or at least, it sure as hell shouldn't be.”

Animosity's Marguerite Bennett will take on a tale of revenge in the 70s. "AfterShock has given me the most creative freedom I've had in my entire career--I'm always delighted to submit these twisted pitches and hear back that this is the one place those strangest stories can find a home," Bennett said. "For my own part, my story is a family revenge drama set in a border town in the 1970s--a ghastly little tale about the gifts that give, and the gifts that take. I'm thrilled to be a part of such a splendid anthology."

SHOCK also gave Phil Hester a chance to work with Jim Starlin, and he couldn't be happier about it.

“I feel privileged to work with one of my all-time comics heroes in Jim Starlin. Our short story Berserker is a prime example of Jim's unique ability to marry very personal narratives with cosmic action and timeless imponderables. I hope I can do it justice.”

Fans can read all these stories and more when AfterComics' SHOCK hits comics shops on March 20, 2018, and you can check out a preview of the issue in the gallery.