AfterShock's new series will reveal just how far a mother will go to save her family, and that includes walking right into the depths of hell.

The series is called Her Infernal Descent and comes from the minds of Lonnie Nadler and Zac Thompson. They couldn't be more excited about the new book, which is a modern retelling of Dante's Inferno.

"The short and easy answer is that Her Infernal Descent is about a middle-aged mother who ventures through the nine circles of hell in an attempt to get her family back," Nadler said. "However, looking below the surface reveals that it's about a lot more than that. It's partially a response to Dante's Inferno, rewriting it and exploring and updating the famous nine circles of hell for a modern audience."

"We really took a deep dive into Dante's work and thought about how we could make this hellish landscape of sin relevant in a world where traditional, biblical sins have become commonplace," Nadler said. "I dare say they're even somewhat pleasurable for most people. This allows us to dive into things like online dating, the foodie lifestyle, self-obsession, sexual ideologies, politics, literacy, and so on."

The series will be drawn by Kyle Charles with colors by Jordan Boyd and letters by Ryan Ferrier, who will all be tasked with bringing this unique vision to life.

"We're really excited about getting to create our own version of hell and we promise it's like nothing people have ever seen before," Nadler said. "It's not just eternal fires and rotting bodies, but there's a much weirder spin on this underworld as the series moves forward. But probably the biggest reason we're excited about the book is that it's an extremely personal story for Zac, Kyle, and I in that it's a tribute to our amazing mothers who have played a big role in our lives. I lost my mom a few years ago and writing this has been a cathartic experience that's helped me come to terms with the fact that I wouldn't be where I am today without her influence."

The story is a very personal one for Thompson, and both writers view the main character as very much a tribute to their mothers.

"I grew up being raised by only my mother after my father suffered a massive stroke when I was seven," Thompson said. "Throughout my life I've been inspired by her strength to raise myself and my two brothers single handedly. Her Infernal Descent came from thinking about a character like that in a world like Diablo. Lonnie and I both have strong relationships to our mothers, so we thought what better tribute than sending a middle aged mom into something horrific and harrowing."

"We both knew that we wanted that central character to be unlike anything people have seen before and in putting the project together we knew we had to model the book off of Dante's Inferno," Thompson said. "We consumed the epic poem and found ways to twist the familiar story within the context of our modern world while bringing our own set of unique influences. It's deeply personal and completely surreal. I couldn't be more proud of this insane book and I'm so excited to share it with people."

Her Infernal Descent is just the start of Lonnie Nadler and Zac Thompson's work at AfterShock. The duo has signed a multi-book deal with AfterShock, which will include 3 new series over the next several years, and they've enjoyed the process immensely thus far.

"It's been overwhelmingly positive, in all honesty," Nadler said. "We feel so fortunate to be working with such a young but growing company and to be part of their roster of amazing talent. Mike Marts has been welcoming since day one, and empowered us to tell the stories we want to tell with little interference. It's a bit odd because we've been big fans of so many books that Mike has worked on over his insane career, and that he puts so much trust in us as young writers is incredibly motivating. Lee Kramer and the rest of the gang have also been amazing to work with. There's a real sense of kindness and care at the company, and that's a big part of why we're thrilled to be working with them on a multi-book deal."

Nadler and Thompson are the first writers to have a multi-book deal with AfterShock, and they couldn't be more thrilled.

"Honestly, we're a little floored," Thomspon said. "This is an incredible opportunity for new writers such as ourselves. From the get go, AfterShock has been really receptive to Lonnie and I's strange voice as storytellers. They only want to help us champion our insane and challenging ideas we've brought to the table. The next few books we have in the pipeline with them are all very different and couldn't have a home anywhere else. We're thrilled to develop a strong body of work within the publisher and know that readers will be able to find our work at AfterShock for the next two years."

You're probably already convinced to give this new series a chance, but in case you're not, here's why you should give it a try. 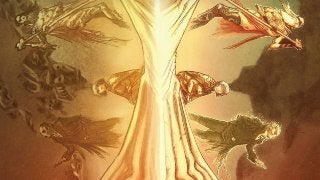 "Every issue we'll be experimenting with format and structure," Nadler said. "We've set some strict rules for ourselves here with only using 9 panel grids and 5 panel pages, which we only break when absolutely necessary. Kyle is doing some of the best work of his career and adopted or strict rules in really unique ways. We're all trying hard to deliver comics that not only have an engaging plot, but use the comic book format to compliment the story. It's the kind of stuff Alan Moore and Neil Gaiman pushed for in the late 80s, and we're just trying to capture even the slightest spark of those works that inspired us. So if you miss that old Vertigo stuff, we think you'll really love what we have in store."

Fans of their previous work will find a lot to love, but overall this series is all about taking risks and doing something different.

"For people who loved The Dregs, Her Infernal Descent is an expansion on that weird fiction tone," Thompson said.. This book is a love letter to literature as well as a meditation on loss. It's an immersive and experimental journey through hell that should be unlike any other book on the stands. We've gone out of our way to meticulously design every page with Kyle into something that is uniquely strange. He's bringing himself to the page in a very real way, some of his work here is absolutely mind blowing. This book is Lonnie and I at our most experimental without any limitations and Kyle is responding with pages that up the ante in every way. So much of Her Infernal Descent is born out of testing limits - our own limits as storytellers and the limits of the comic book medium."

You can find the solicitation details below.

A tale of loss told in five parts. Any good mom would march through the inferno of HELL to get her family back.

Unable to cope with the burden of grief, a middle-aged mom descends the nine circles of hell to retrieve her forsaken family. Guided by the ghosts of William Blake and Agatha Christie, this no-nonsense mother journeys deep into a bizarre underworld filled with celebrity sinners, surreal landscapes, and absurd tasks. HER INFERNAL DESCENT is a retelling of Dante's Inferno that updates the themes for a modern audience.

From the writers of the break-out hit The Dregs, and the artist of Roche Limit, this is HELL like you've never seen before.

She-Hulk Gets Review Bombed Before Release