The animals are now awake and thinking for themselves, but that doesn't mean they've ditched all of their natural tendencies.

Marguerite Bennett and Eric Gapstur have created a world unlike any other in AfterShock Comics' Animosity: Evolution and ComicBook.com has your exclusive first look at issue #5. Humans and animals live amongst each other these days in mostly civil ways, but there are still some lingering issues from their past lives, and those rear their unfortunate head here in rather explosive ways.

Eric Gapstur and Rob Schwager's visuals are so good at conveying tone, and all one needs to do to see that in action is go and look at the mice interrogation scene. If you've ever wanted to be scared out of your mind by a rat, well, then we've got the perfect solution for you.

You can check out the preview in the gallery, and the official description is included below.

"Murder, intrigue, and men playing God in the seedy underbelly of the City by the Sea—a hapless refugee hunts for the truth in a noir crime world...

From the brilliant mind of creator/writer Marguerite Bennett (INSEXTS, Bombshells and Batwoman) with artwork by SHIPWRECK's Eric Gapstur—ANIMOSITY: EVOLUTION is an exciting new series that expands upon this already amazing world!" 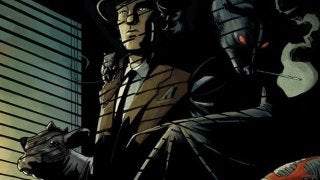 If you're interested in the series overall, the description for issue #1 can be found below as well.

From the brilliant mind of creator/writer Marguerite Bennett (INSEXTS, Bombshells and Batwoman) with artwork by Eric Gapstur--ANIMOSITY: EVOLUTION is an exciting new series that expands upon this already amazing world!"

Animosity: Evolution #5 from AfterShock Comics is in comic stores on April 11.

Nintendo Switch Game Free to Download for One More Day

N64 Classic Now Available to Play for Free for Some