Archie Comics has provided ComicBook.com with an exclusive first look at the covers to Archie Vs. Predator II, featuring art from Robert Hack, Howard Chaykin, Rebecca Isaacs, Michael Walsh, Bill Galvan, Greg Smallwood, and Kelly Fitzpatrick. The covers will run on the second issue of the miniseries, which will be available in the upcoming issue of Previews magazine and will be available in stores and online on August 28. You can see the images in the attached image gallery and the official synopsis below.

2015's Archie vs. Predator from Alex De Campi is finally getting its sequel this summer, with The Chilling Adventures of Sabrina's Robert Hack on art and De Campi back on scripting duties. The story will pick up from where the previous installment left off, and send the town of Riverdale back into the terror-filled world of The Predator. Archie and company have suffered huge losses (including Archie himself who, if we recall correctly, is actually a Predator designed to look like Archie now?), and that is just the starting point for what de Camp says is an exploration of the idea of franchise reboots. 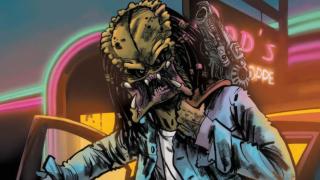 "The first question people are going to be asking is, 'But...how?' and, for my money, that's the best mind-set to have when you're talking crossovers," Archie Comics co-president Alex Segura told The Hollywood Reporter. "Alex de Campi wrote an iconic, legendary mashup — but, I have to tell you, her idea for the sequel goes above and beyond. The fact that we got superstar Robert Hack to bring it to life is sure to make the end result one of the most bonkers, visceral and off-the-wall events in comic book history. Strap in. This is gonna be fun as hell."

Part of the idea -- as De Campi herself acknowledges -- could be that Archie was rebooted (with new numbering and an updated visual aesthetic) just after Archie vs. Predator was written, and The Predator got a cinematic reboot last year, effectively meaning that they can use elements from the respective new mythologies that was not on the table in 2015. De Campi explained, "As usual with my work, you'll be able to read it as that if you want to, but it's mostly going to be a lot of teenagers dying in increasingly creative and sudden ways, and also jokes. Entertaining the reader comes first. The other stuff, the formalist obstacle course I set myself, I do because it entertains me."

ARCHIE VS. PREDATOR 2 #2 (of 5)
Our trios (new and old) are getting to know each other better—like Classic Betty and Veronica discovering that the newer versions of themselves actually AREN'T both trying to win over Archie's affections. There's a lot to take in in this brave, new world, but they've got a more pressing issue to deal with: Predator-Archie is quickly turning back into a Predator, and time is running out. Fortunately, the Riverdale Halloween Dance may be just the cover the gang(s) need.