DC has provided ComicBook.com with an exclusive preview of Wednesday's Martian Manhunter #5 from writer Steve Orlando and artist Riley Rossmo. In a surprising twist, the series has been dealing with life on Mars before, during, and after H'ronmeer's Curse -- the cataclysmic event that killed much of the planet. That plague has long been tied to J'Onn's twin brother Ma'alefa'ak J'Onzz -- a character who made his live-action debut on Supergirl just last night. In this week's episode, though, the Curse has passed, and another Martian threat is making its way to Earth. You can check out the pages in the attached gallery and the official solicitation text below.

This series is one of DC's current 12-issue maxiseries, inspired in part by the massive success of Mister Miracle by Tom King and Mitch Gerads -- and it has a very distinctive look that only Rossmo could bring to it. "A lot of the shapes, I draw from marine plants and animals, so that was one end of the stuff I put in," Rossmo told ComicBook.com. "Then, the other side of it was desert creatures and plants. So, I put them together and ground them up, and then that's how the flora and fauna of Mars came to be. I feel like when you design stuff, for me anyways, oftentimes if you take some kind of element that's familiar to somebody and then you sort of mash it with something else, you can get a really unique design, but it keeps it accessible. It doesn't become too strange that you can't relate to it. So, I tried to apply that to Mars." 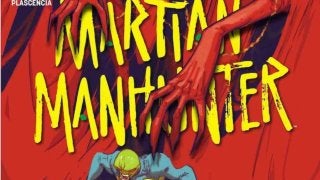 Now that the series has moved to Earth, it presents a different set of challenges for J'Onn, of course, but at the same time, the book retains its look and style, and some of the mythology changes made by Orlando and Rossmo are likely not just to stick with the character long-term, but to be reflected in next season with a Martian big bad.

J'onn J'onnz is no longer the sole survivor of the planet Mars! The vicious criminal Charnn somehow survived the epidemic of H'ronnmeer's Curse—and now he's here on Earth! To survive his attack, J'onn will need Diane's help—but even after he told her everything, what secrets is she hiding?