DC has provided ComicBook.com with an exclusive preview of Superman #11 from writer Brian Michael Bendis and the art team of Ivan Reis, Joe Prado, Oclair Albert, and colorist Alex Sinclair. The "Unity Saga" comes to a dramatic head in this issue as the Superman family go to war while Rogol Zaar continues to beat on General Zod. Since the beginning of Bendis's run, Zaar has been a constant presence, driving story forward in a way that, almost a year agonow, Bendis promised would pay off big time a year from then -- son don't be surprised if "The Unity Saga" and the upcoming events in the Superman titles get a little crazy.

"I called up, and I said, 'I'm not pitching, but have you ever done a story about what really happened to Krypton?'" Bendis explained of Rogol Zaar's real-world origins. "And then Dan [DiDio] did this voice -- and it's a voice, as a fellow author, you know this is the good voice. He just goes, 'Why, what really happened?' And then, you know you're going to have a good time. That started the ball rolling for here and opening up the historical precedent of what happened with Krypton. What were the other elements in the universe going on during that? How did other people react to it when it happened? Not only is it, obviously, a genocide of the highest order, but that kind of thing affects the entire galaxy, and we're going to see how that's been playing out over the years." 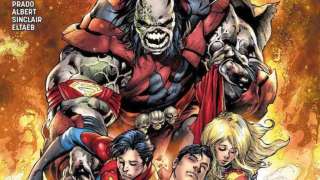 You can check out the official synopsis below, and the images in the attached gallery.

Named one of the best books of the year, the Unity Saga continues! The drama of the House of El tears the galaxy in half as Superman and his son are forced to confront his father about the secrets of Krypton in front of the gathered heads of the galaxy. Superman makes a bold choice that will forever change his relationship to the Earth, the Justice League and his family! Witness one of the most important chapters in Superman history!

In this latest episode, we go all in on the Spider-Man: Far From Home trailer and Disney's big announcement of movie releases! Is Spider-Man introducing the multiverse? Will Aladdin or Lion King be the live-action remake king this summer? Make sure to subscribe now and never miss an episode!