We've just learned that one of the Arrowverse's most memorable villains, Gorilla Grodd, will be appearing in the third season of Legends of Tomorrow. This news came from the show's panel during the Television Critics Association press tour.

DCTV fans will recognize Grodd from his appearances on one of Legends' sister shows, The Flash. After being introduced in Season 1, the mind-controlling gorilla became a frequent antagonist of the Scarlet Speedster, culminating in last season's epic 'Gorilla City' two-parter.

As of now, there is no indication as to when Grodd will appear on Legends of Tomorrow's third season, and exactly in what capacity. Still, the inclusion of the fan-favorite gorilla will certainly be welcomed, although probably not by the show's titular group. After all, the gang will have to deal with a whole slew of other villains - including a resurrected Damien Darhk, the Kuasa, and Rip Hunter's Time Bureau - when Season 3 premieres. 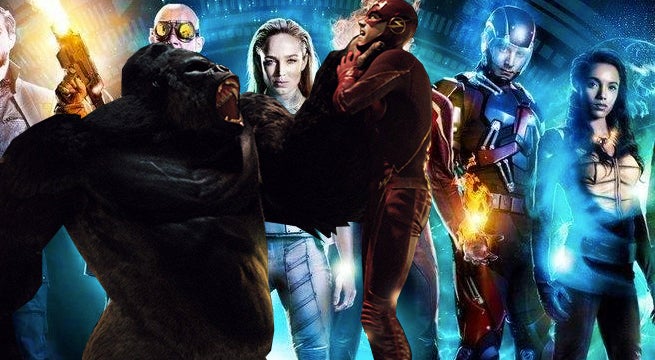 The series returns to Tuesday nights at 9 p.m., following new episodes of The Flash, in October.

We reunite with billionaire inventor Ray Palmer (Brandon Routh), the unconventional historian-turned-superhero Nick Heywood (Nick Zano), and Professor Martin Stein (Victor Garber) and Jefferson “Jax” Jackson (Franz Drameh), who together form the meta-human Firestorm. Once reunited, the Legends will challenge the Time Bureau’s authority over the timeline and insist that however messy their methods may be, some problems are beyond the Bureau’s capabilities. Some problems can only be fixed by Legends.

Supergirl premieres on Monday, October 9th at 8 pm, while The Flash debuts on Tuesday, October 10 at 8 pm. Legends of Tomorrow moves to Tuesdays this Fall, airing right after The Flash on October 10. On Thursday, October 12 at 9 pm Arrow will premiere to round out the DC roster.

Legends of TomorrowSunday at on The CW

Gorilla Grodd Will Appear in Legends of Tomorrow Season 3