Comicbook.com was lucky enough to be included in a handful of journalists who traveled to set of DC Films' Wonder Woman movie - and months later, we've gotten to visit the offices of Warner Bros. in London, where director Patty Jenkins was hard at work with producers Chuck Roven, Geoff Johns (and so many others), editing together the final cut of Wonder Woman to release in theaters this June.

During both visits we were lucky enough to be some of the first people to learn more about and see the latest footage from Wonder Woman. And one of the biggest talking points of that experience was learning all about Wonder Woman's new origin in the DC Extended Universe, which includes a new story about her creation, the backstory of the Amazons, their mystical island of Themyscira, and connection to Greek mythology.

Fall of Gods, Rise of Amazons 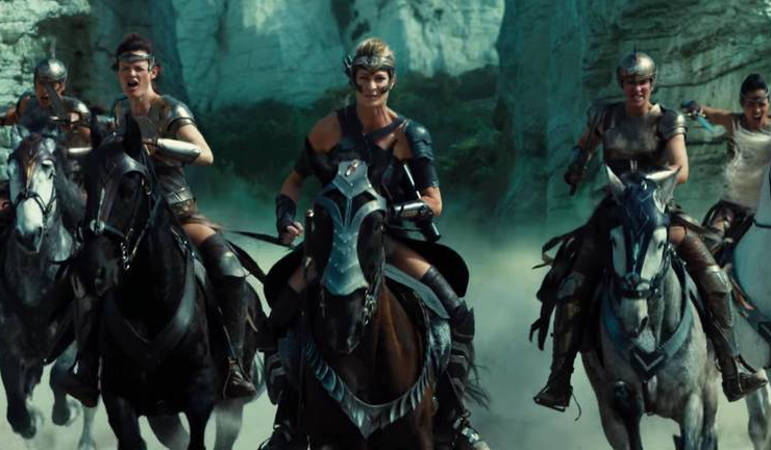 In DCEU mythology, the story of the Greek Gods goes a little differently.

In this telling, Zeus creates mankind to be companions to the Greek Gods; however, Zeus' son, Ares the God of War, is jealous of his father's love of mankind, and so he infects them with the seed of war, turning them against each other. As mankind begins to destroy themselves and the world with war, Ares attacks and slays his fellow gods.

In response, Zeus calls upon the Greek Gods for help, and Aphrodite, goddess of love, creates the Amazons, who rise up out of the sea to defend the world and stop Ares - which they do, for a time.

Fall of the Amazons

The Amazons manage to capture Ares for a while, but the God of War eventually does get free and enslaves the Amazons, aiming to finish the destruction of the Zeus and the rest of the gods.

Ares succeeds in his evil intentions, but before Zeus is brought down, he manages to create two safeguards against Ares: one is the mystical hidden island of Themiscyra, and the other is the mystical power of "The God Killer," which is seemingly contained within a powerful sword kept on Themiscyra.

After being under Ares' sway, the Amazons are freed by the will of Queen Hippolyta, who breaks the chains of enslavement, and manages to lead the Amazons to Themiscyra, where they are safe from Ares' sights, as well as the war-filled hearts of mankind.

Princess of the Amazons 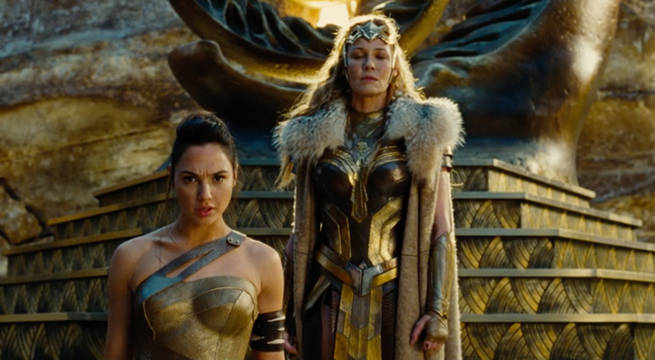 In the movie, we meet Diana when she is eight, the only child on the island of Themyscira. Diana leads something of a charmed life, as her mother, Hippolyta (Connie Neilsen) decrees she is not to be trained as an Amazon warrior.

That changes when Hippolyta's sister, General Antiope (Robin Wright), sees potential in Diana, and decides that best way to keep her niece safe, is for Diana to be a fully-trained warrior, capable of protecting herself. Antiope begins training Diana and secret, and makes a startling discovery: the girl is more powerful than any mere Amazon - a power that even Diana doesn't realize is there.

Eventually, Hippolyta accepts what Antiope has done, and decrees that if Diana is going to be a warrior, then "Let her be unconquerable."

Diana grows up to be the greatest warrior the Amazons ever had, but still feels unfulfilled about her place in the world (and the destiny she doesn't even know she's missing out on).

...But that all changes when Steve Trevor (Chris Pine), the first man Diana's ever seen, crash lands on Themyscira.

Trevor comes bearing news of a great war that's consuming the outside world - one in which a nefarious chemist and fanatical general plan to use a new type of weapon that will obliterate millions of lives. Even hearing this, Queen Hippolyta maintains that The Amazons' place is on their island; however, for Diana, the fingerprints of Ares, their enemy, is all over that war.

With Trevor's arrival, Diana sees a chance to fulfill her destiny and bring glory back to the Amazons - though the world and her destiny aren't quite what she thinks they will be.

Are you excited for Wonder Woman to hit theaters? It's currently ranked #8 on our Anticipation Rankings below, so be sure to vote and help it rise to the top!

Who Are Wonder Woman's Villains?

Batman May Appear in Wonder Woman