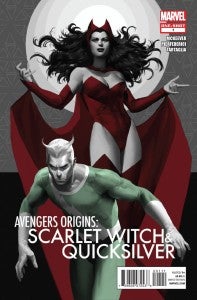 In addition to not being allowed to call Pietro and Wanda Maximoff "mutants," The Hollywood Reporter's Borys Kit also claims that Marvel Studios' agreement with 20th Century Fox maintains that Joss Whedon's anticipated sequel will not be allowed to refer to them using their code names, presumably to avoid any potential confusion should the X-Men films and Avengers films elect to both use the characters at the same time. When the agreement was struck, that set of circumstances probably seemed pretty unlikely, but after weeks of public awareness that Quicksilver and The Scarlet Witch would appear in Marvel's as-yet-untitled Avengers sequel, X-Men: Days of Future Past director Bryan Singer announced today that Quicksilver would be joining his film, played by Kick-Ass actor Evan Peters. At the time, ComicBook.com and a handful of other sites, aware that the rights to these characters were shared, interpreted the event as a quiet way of linking the franchises...but shortly thereafter, a report from HitFix came out, saying that Fox was burning their bridges with Marvel by using the character and that while the companies might make nice about this in public, there's some real animosity bubbling under the surface. Kit, who runs the Heat Vision blog for THR, confirmed those rumors via Twitter, saying, "Following up a bit on DrewAtHitFix's take on Quicksilver: Heard that Fox can actually use the Quicksilver and Scarlet Witch names...Marvel can use the the names Pietro and Wanda." He added, "Also, to insert the character so late in the game (X-Men is already shooting) is Fox's way of asserting the character and a dig at Marvel." Assuming these reports are true, which seems likely to be the case at this stage, it's hard to imagine what Fox's motivation could be. While the characters have appeared for years in both X-Men and Avengers publications, they're hardly indispensable to the mythology of either franchise. Maybe they felt they should have been informed about Whedon's decision to use the co-owned characters before Whedon and Feige announced it to the fans? It's hard to say, since we have no evidence that they weren't informed.