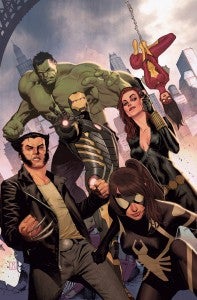 Kelly Sue DeConnick has alerted fans that Avengers Assemble will end in March. When Marvel Comics released their April 2014 solicitations today, no new issue of Avengers Assemble was included. A fan asked series writer Kelly Sue DeConnick (who had recently been co-writing the series with Transmetropolitan's Warren Ellis) about the omission, wondering whether it meant the book was over, and DeConnick replied via Tumblr: It is indeed.   Ellis wants me to tell you he "murdered it with special English curse magics," but in truth the book fulfilled its mandate, so it's done with issue 25.   Thank you SO MUCH for all the support — it's been a blast.  DeConnick has been doing more work with Image Comics lately, so it may be that we see additional creator-owned work from her, rather than more with the Big Two, but she still does have Captain Marvel, which is getting an All-New Marvel NOW relaunch soon and, finally, a regular artist. What the comic's "mandate" might have been could be interesting to know--likely just having a book on the shelf that matched the then-new Avengers Assemble movie, as it was called in some other markets (Marvel's The Avengers here in the U.S.).