The Avengers: Infinity War trailer featured a host of new costumes for Marvel heroes, and thanks to new promotional items we can see them up close.

A new set of cup toppers have made their way online, and aside from actually being pretty slick, they provide some good looks at some of Infinity War's characters (via ComicBookMovie). The cup toppers released so far include Spider-Man, Thanos, Teenage Groot, Hulk, and Iron Man, though Spider-Man is by far the best one.

That mostly stems from his new Infinity War costume, which features the traditional red and blue but replaces the black accents from Homecoming with gold ones. The way the blue flows into the red though has been redesigned, and as you can see here it looks exceptional. Granted, the figure won't feature the glowing eyes from the trailer, but it's still pretty impressive. 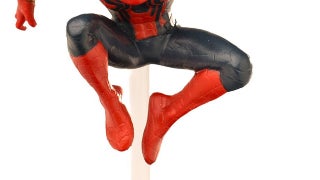 Next up is Thanos, who is sporting his own flavor of "mad titan on the way to the gym" gear. Despite the more casual clothing, that Infinity Gauntlet he's brandishing on his left hand will just about guarantee no one is making fun of him for it.

After that, we have Teen Groot, who is quite upset at someone trying to take his gaming device away. It's the same face many had over Black Friday trying to get a Nintendo Switch, so can't really blame him.

A group shot of the cup toppers reveals two additional figures, those being the Hulk and Iron Man. The Hulk looks about like what you would expect, angry and green. As for Iron Man, his suit is looking slick and streamlined, foregoing the major redesigns of suits past and opting for red armor with blue and gold accents. The suit mirrors the Bleeding Edge version seen in the comics and looks as good in the film as it did on the page.

You can view all of the cup toppers in the gallery.

Avengers: Infinity War currently enjoys a 4.37 out of 5 on ComicBook.com's anticipation rankings, and you can submit your vote for that here.

Fans can see their favorite Marvel heroes on the big screen when Avengers: Infinity War lands in theaters on May 4, 2018.