Marvel Comics is once again teasing the death of Thor as Jason Aaron and Russell Dauterman prepare to bring their epic saga to its conclusion.

Take a look at the art in the attached gallery. 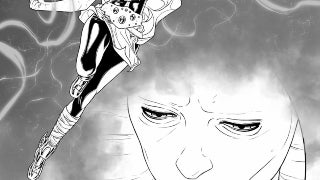 The Death of the Mighty Thor Gallery

"This is it, folks! The big showdown between Thor and Mangog. The penultimate chapter of 'The Death of the Mighty Thor,'" teases series editor Wil Moss in a statement. "Jason Aaron and Russell Dauterman have been building to this issue for over three years, and you absolutely do not want to miss this. You may think you know where things are going, but I promise you do not.".

Mangog already has one Thor's death to his name, having murdered the War Thor already, with a little help from Malekith the Accursed. How many more of the Asgardians will fall before the rage of the beast?

Marvel Teases The Death of Thor