When the casting process for Guardians of the Galaxy Vol. 2 commenced, its casting director, Sarah Finn, suggested to director/screenwriter James Gunn that they should have Elizabeth Debicki (The Man from U.N.C.L.E., The Night Manager) audition for the role of Ayesha -- the high priestess of a genetically perfect and singularly arrogant alien race known as the Sovereign.

Her audition went so well that Gunn only brought in one other actress to tryout for the part, and even though her unnamed competitor was fantastic as well, Gunn felt as though Debicki was born to play Ayesha -- even though at that time neither actress was informed as to which role they were auditioning for. Once she was offered the role, Gunn explained to Debicki who she would be playing and that she would be spending hours in hair and makeup to look like a shimmering gold goddess.

But she didn't mind, since she felt as though Ayesha's costume was quite impressive. "It was so thought out. So Judiana [Makovsky], who's the costume designer, is a genius," the 26-year-old Australian actress told Collider. "I think she's incredibly talented. And James is a visionary, and is bold, and the two of them together and then the hair and makeup departments were incredibly talented. So when I first saw the artwork for Ayesha, I remember going into James' office and it was all up around the walls, all the characters, and there was the Ayesha section, and I couldn't really have imagined it more sort of wonderfully, I suppose. It was so exciting for me to get to this blend of Elizabethan kind of period dress, metallic, sort of Amazonian, and is very operatic and very theatrical. I love that as an actor, it's great."

And now you can head on down to our slideshow to view Ayesha and Ego concept art that was created by conceptual artist, Kevin Chen. He has released a collection of images showing early concept exploration of one of Ego's forms and Ayesha's headdress and dress.

And what was Debicki's hair and makeup process like? "I had two people on the makeup and another person on the hair but the most elaborate thing about Ayesha is the costumes that I wear," she told NZ Herald. "That took multiple people to put on and get all the pieces together. That dress I'm wearing when I sit on the throne is a really elaborate piece of costuming and that took multiple people to move around." She added, "All in all, it's a good few hours and a fair few humans involved." 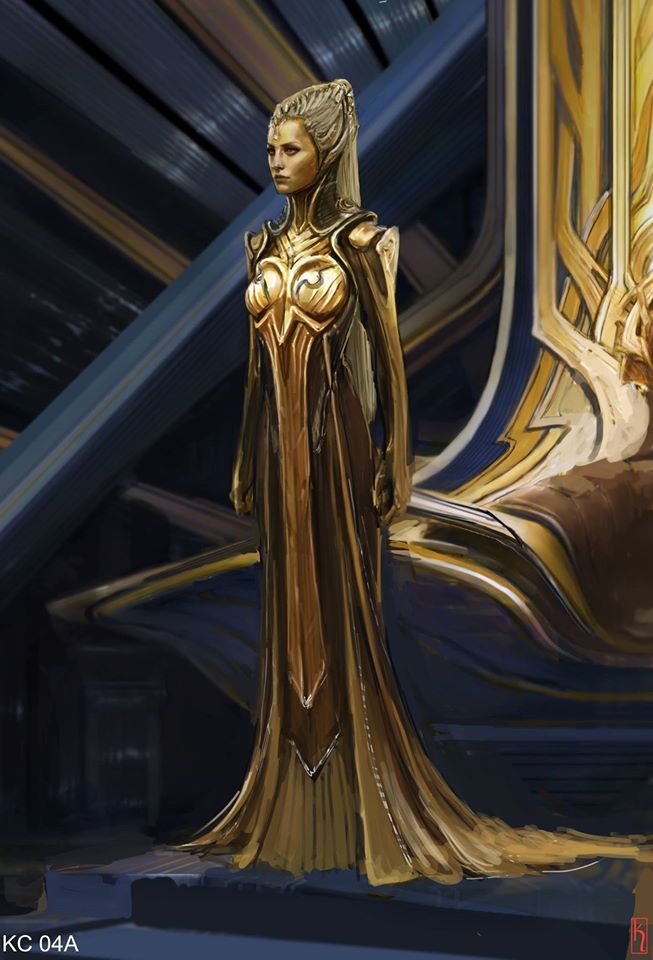 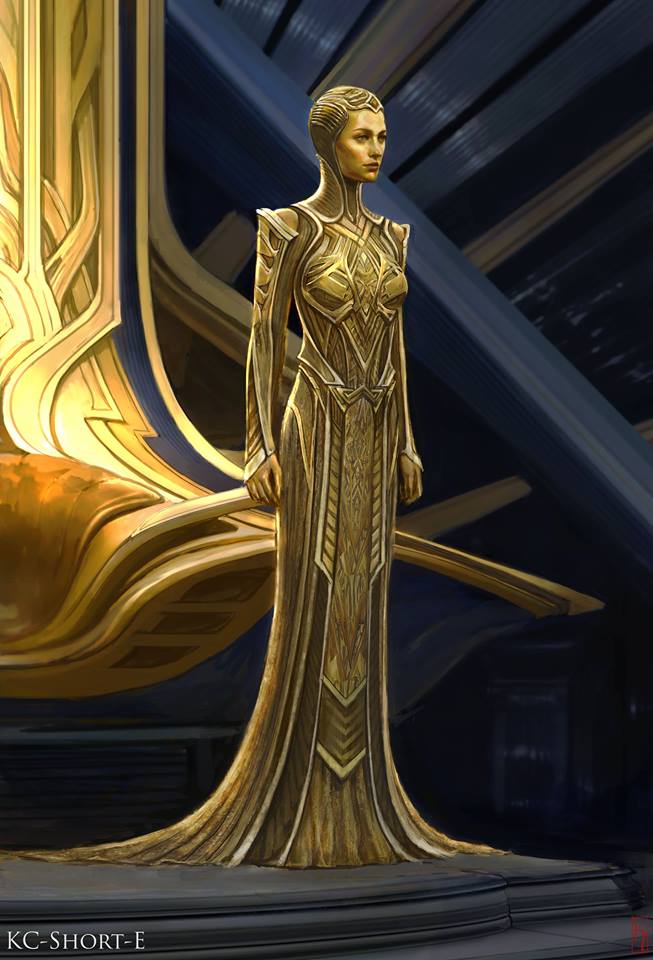 For Ego's look, the costume designer looked to the frontier. "We wanted something where he was kind of a space frontiersmen mixed with a little bit of western because that's Kurt Russell's style," Makovsky shared in the production notes. "I didn' t want to do a typical, superhero where it's molded and hard. So it's actually all leather, like a frontiersman would be, and we laced it all together. It's layers and layers of different leathers on op of each other that are laser-etched and dyed to make an almost medieval/renaissance detail all over it."

"When we first talked about it with Kurt, he looked at some of the sketches and really got it," Makovsky added. "It's kind of like a space conquistador like Don Quixote. We looked at actually how conquistador clothes were made and we went in that direction, but made his pants and boots very modern." 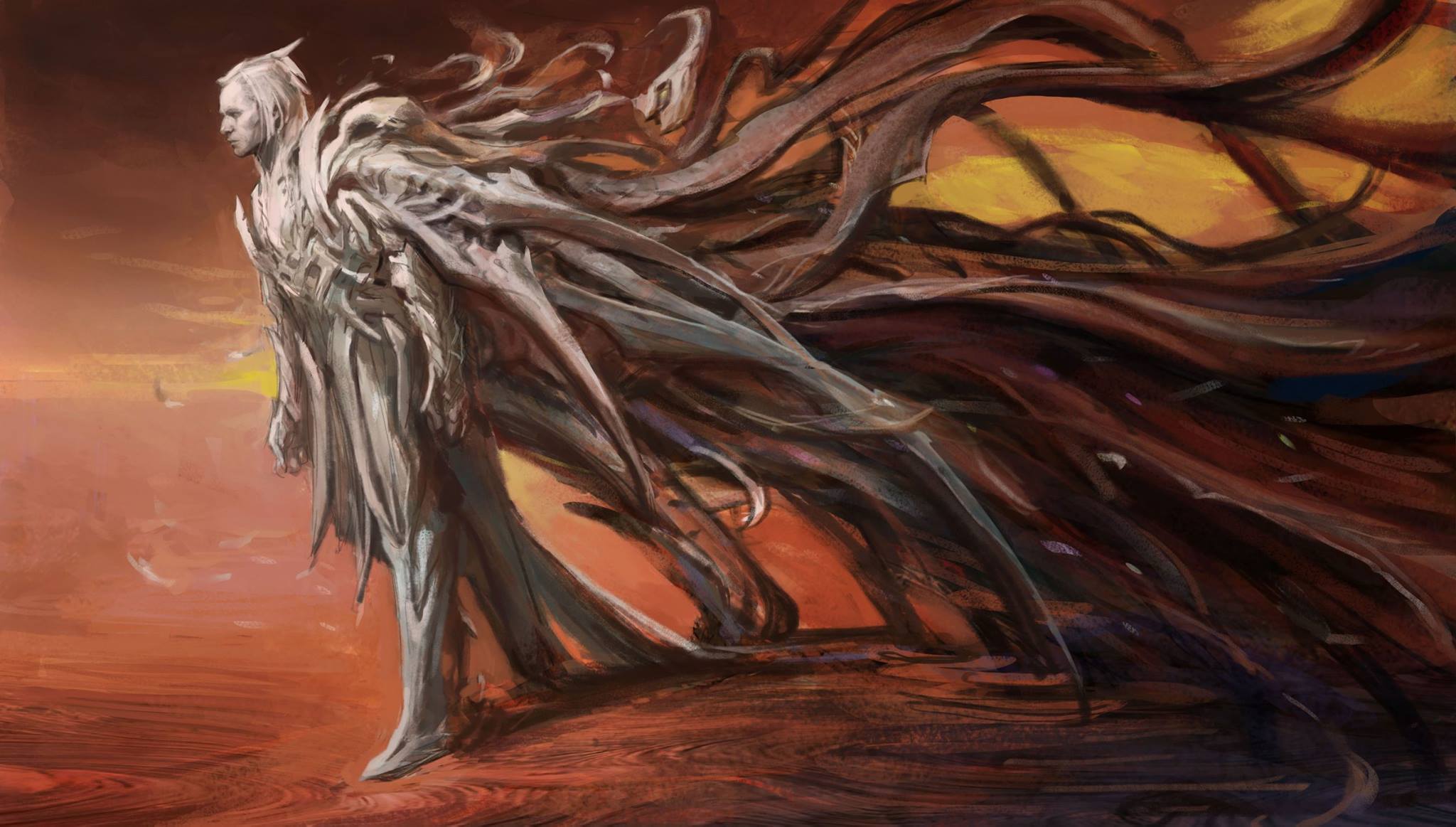 Guardians Of The Galaxy 2: Early Ayesha And Ego Concept Art