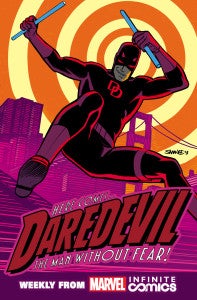 When Mark Waid's Daredevil prints its final issue in February, that's not quite the end of the line for the famed writer's Eisner-winning take on the character. The series will transition into Marvel's digital-only (although now becoming digital-first, as some of them are finally starting to see print as part of trade paperback collections) Infinite Comics format for a story that pairs Waid with his Irredeemable and Insufferable co-creator Peter Krause. The series will run weekly, although as yet there's no clear indication how long the story will run or whether there will be an All New Marvel Now release for a new Daredevil #1. Many had speculated that the cancellation of the series just meant an opportunity to renumber and get a bit more in sync with the Marvel Universe while keeping Waid around. Matt Murdock heads west in Daredevil: Road Warrior, beginning in February just a week after the release of Daredevil #36, Waid's last print issue on the title. Following on the heels of Infinite Comic series like Wolverine: Japan's Most Wanted and Iron Man: Fatal Frontier, Daredevil: Road Warrior is designed specifically for mobile devices and fully embraces the technological opportunities. It's a coast-to-coast journey from the Big Apple to sunny California. It seems that, with Venom having recently relocated and a number of the All New Marvel Now titles taking place elsewhere in the country or the Marvel Universe, Marvel Comics are becomming a much less New York-centric place these days. "Matt's beginning a whole new chapter in his life following the events of Daredevil #36, and he's excited but apprehensive at the same time," Waid said. "You can be a Man Without Fear and still be a little worried about where the next paycheck is coming from. Daredevil: Road Warrior is a coast-to-coast adventure/chase with thrills aplenty." Waid, of course, runs Thrillbent, a digital comics publisher, and has been a strong advocate for pushing the boundaries of digital comics and their distribution; he's been credited by people at Marvel with being instrumental to the decision to make Infinite Comics in the first place. Some fans and retailers take his enthusiasm as a disdain for print, or for the direct market, but Waid insists that's not the case and in fact is a stakeholder in a pair of major comics retail stores himself.