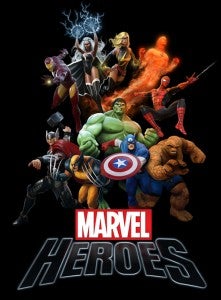 Marvel Entertainment and Gazillion Games have released a first look at the upcoming Marvel Comics MMO, Marvel Heroes. It features, among other things, popular characters from the Avengers, Spider-Man and X-Men feature films squaring off against Dr. Doom, who is in possession of the Cosmic Cube (also something that's pretty familiar to non-comics readers who know it as "The Tesseract," from The Avengers and Captain America: The First Avenger). The game appears to be little more than an updated version of Marvel Ultimate Alliance so far; the graphics are stronger, but it appears as though you still cannot custom-create your own characters. That's the opposite, of course, of DC's DC Universe Online, which  allows users to create their own heroes to play in the DC Universe but not to play using DC's own characters.