Marvel is stepping up their animation game in a big way and will launch a new generation of heroes at the same time.

Today Marvel announced a new animated feature film titled Marvel Heroes: Secret Warriors, which will feature some of the biggest up and coming heroes in the Marvel Universe. Characters like Ms. Marvel, Miss America, Squirrel Girl, Quake, Spider-Gwen, Inferno, Patriot, Exile, and Captain Marvel will join forces against the villainous Hala, with some help from Tippy Toe and Lockjaw of course.

Marvel Rising: Secret Warriors will launch first as a series of six four-minute digital shorts, with the full film coming to the screen in 2018. Marvel director of content and character development Sana Amanat personally can't wait to see these new stars take hold with young fans. 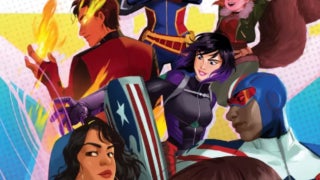 "It came out of a desire to be able to tell stories about characters that we think are the next great heroes of the Marvel Universe," Amanat told Buzzfeed. "I think it's incredibly important that we tell young women and young girls that they have this incredible power within themselves, and that they have heroes out there [who] ... they can look up to, especially in these times."

Marvel assembled a talented cast to bring these characters to life, including Kathreen Khavari, who will be voicing Ms. Marvel.

"To have this brown girl who's a Muslim, who's a superhero, who doesn't fall under these stereotypes ... [and] is just a good, decent human being who wants to bring that out in other people — I feel really fortunate to be able to portray her," Khavari said.

The Marvel powerhouse Miss America will be voiced by Cierra Ramirez, while Milana Vayntrub will portray the lovable Squirrel Girl, and she couldn't be happier.

"[I] feel like a women will feel represented and impassioned by this badass young woman who wants to make the world a better place," Vayntrub said. She's especially happy that the character isn't simply "for the male gaze. And it's not about, 'Will my crush like me after this?' There's more dimension to [Squirrel Girl] than being a babe."

Agents of SHIELD star Chloe Bennet will be reprising her role as Quake, while Dove Cameron will voice Ghost-Spider, the secret codename of Spider-Gwen. The cast will also feature Tyler Posey as Inferno, Kamil McFadden as Patriot, Kim Raver as Captain Marvel, and Booboo Stewart as Exile, alongside sidekicks Tippy Toe and Lockjaw, who will be voiced by Dee Bradley Baker. The team will be facing off against of SHIELD veteran in Ming-Na Wen, who will play the part of the formidable Hala.

Stewart is equally excited to be a part of the landmark project. "To just be a part of this new wave of superheroes and to have women at the forefront of that ... I feel like it's great that young kids are just going to grow up with it," Stewart said.

You can view a preview of the film in the video above, and the poster can be found in the gallery.