The Fantastic Four have been disbanded since the events of Secret Wars. The world believes that Reed and Sue Richards, as well as their children, all died saving the world from annihilation. The Thing and the Human Torch were left to soldier on, but have struggled with their grief.

But in today's Marvel Two-In-One #1, Ben Grimm and Johnny Storm are given a new purpose from a surprising gift-bearer, their old enemy Victor Von Doom. Now Ben and Johnny have the means to reach the multiverse, and not a moment too soon as Johnny seems on the edge of self-harm and may be losing his powers.

But can Doom be trusted? Was Ben right to lie to Johnny about Reed and Sue in order to motivate him? Will Johnny and Reed find their lost family and reignite the Fantastic Four?

ComicBook.com spoke to Marvel Comics executive editor Tom Brevoort about what Marvel Two-In-One means for Ben, Johnny, and the future of the Fantastic Four.

We find Ben and Johnny in pretty dark places in this issue. Is this series about building them back up or are things going to get worse before they get better?

Tom Brevoort: I don’t think the series as a whole is meant to be dark, but certainly the personal journey that Ben and Johnny find themselves on is not going to be an easy one emotionally for them. And things are certainly not going to get any easier as it goes along—in no small part because Ben is (SPOILERS) hiding a pretty crucial bit of information about their journey from Johnny, and that’s going to keep things lively on a personal level.

The major story of Marvel Two-In-One is set off by the actions of Victor Von Doom, whose relationship with Johnny, Ben, and the Fantastic Four can be charitably described as “complicated.” What can you say about his motivations and his role in the series going forward?

TB: This is the same “Infamous Iron Man” that Brian Bendis has been writing through both of the Iron Man titles over the past year or so. So it’s a post-Secret Wars Doom who got everything he ever wanted, found it ultimately hollow, and is now struggling to make of himself a better man. But all that said, Doom remains a profoundly flawed individual, and even the best of intentions can lead to the direst of endings—especially when you’re talking about characters that have as much water under the bridge between them as Ben, Johnny and Victor do. And you’ll get a good sense as to when the enmity began between Ben and Doom in Marvel Two-In-One #2 in a few short weeks—Chip dives straight into that relationship in a big way.

Similarly, what can you say about Ben’s decision to lie to Johnny at the issue’s end? Or is he lying? Memories seem to be fuzzy when it comes to the events during and around Secret Wars…

TB: Ben is lying, let’s make no mistake about that. The fact that we, as omniscient observers of the wider Marvel Universe are aware that, somewhere out in the multiverse Reed, Sue, and the kids are still completing the work of re-creating everything doesn’t change the fact that, as far as Ben knows, his family gave their lives to stave off the final Secret Wars incursion. But he’s coming at his lie from the best-intended place in the world—he can see that Johnny isn’t dealing with his grief and loss in a meaningful way, and he’s almost on the verge of self-harm. That said, Ben also doesn’t seem to have much of an overall plan, he’s just making things up as he goes, Yancy Street-style, so there’s a whole house of cards waiting to fall down upon his head once the Torch finds out. (And the fact that Doom knows that Ben is lying adds an extra layer of complication to things!)

TB: Well, make no bones about it, while this may say Marvel Two-In-One on the package, this is really a Fantastic Four book, in spirit as well as content. So yes, it’s definitely a series that’s about that missing element that people have been longing for within the Marvel Universe. In a very real sense, Johnny and Ben’s feelings about their seemingly-departed family echo the feelings of the audience all these months. And the fact that, even though Ben thinks he’s lying to Johnny we know that he’s accidentally on the right track means that there’s every possibility that our terrific two might inadvertently stumble over the breadcrumbs that will lead them and the rest of the Marvel Universe towards the reunion that everyone has been waiting for!

Marvel Legacy #1 left us with the tease that Valeria is very interested in returning to Earth. Now Ben and Johnny seem set on a course for the multiverse. What can you say about how these plot threads are going to intertwine in Marvel Two-In-One? Are they running parallel, or are they on a collision course?

TB: Well, they certainly are two threads involving the very same thing, so how likely do you think it might be that they’ll become entangled at some point? The sequences in Marvel Legacy #1 were done with Marvel Two-In-One in mind, and so there’s a definite connection and flow of each of those storylines towards one another (to say nothing of that little glimpse we got in the Power Pack #63 one-off.) Stuff is happening—exciting! 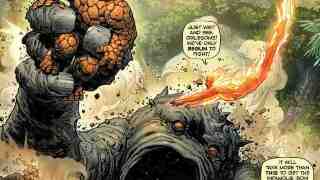 Lastly, this issue likely offered longtime Fantastic Four fans a taste of something they may have felt was missing from the Marvel Universe since Reed and Sue disappeared. Are there any last teases you’d like to leave them with?

TB: Like Ben and Johnny, the readers are now just starting at the beginning of their journey, and there are some fabulous and terrifying and wondrous sights to come in the issues to come. This is the start of something big! Anybody who’s been longing for another taste of that Fantastic Four wonderfulness will have a Big Gulp-full every issue from here on out! The Mole Man! The Mad Thinker! Galactus and the Silver Surfer! And that ever-popular More! Chip is diving deep into the FF well of goodness for this series!

And, hey, look at this cool cover to issue #2, with its full-on homage to Fantastic Four #1 in place!

INTERVIEW: Tom Brevoort on What 'Marvel Two-In-One' Means for the Fantastic Four