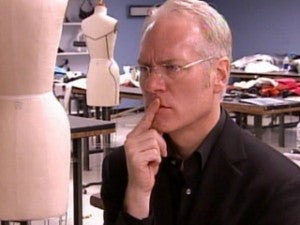 Is any celebrity safe these days from the reach of the comic book treatment? In a move that will delight many, Project Runway's resident fashion maven Tim Gunn will make his comic book debut in the upcoming revival issue of Marvel's Models, Inc. The series, originally done in the 1960's, will be a limited one, and Gunn will bring his trademark quips and debonair sense of style to the premier issue on September 9th. As he is preparing to defend an exhibit on superhero costumes from a group of villains, Gunn will be featured in this debut. The story, titled "Loaded Gunn", will be part of the revival of the Marvel title, and several original characters from the first run are promised! Gunn himself was bemused by the proposal to be featured in a comic book, "When they came to me, I said, 'I'm about to turn 56 years old. Are they crazy?Yet the storyline gets crazier as the fashion mentor will be trading in his signature suit and tie for something more impressive." Not coincidentally, the issue will be coinciding with New York's highly touted Fashion Week. Readers should pick up the issue next week to see if Gunn can "make it work" in the comic book medium!