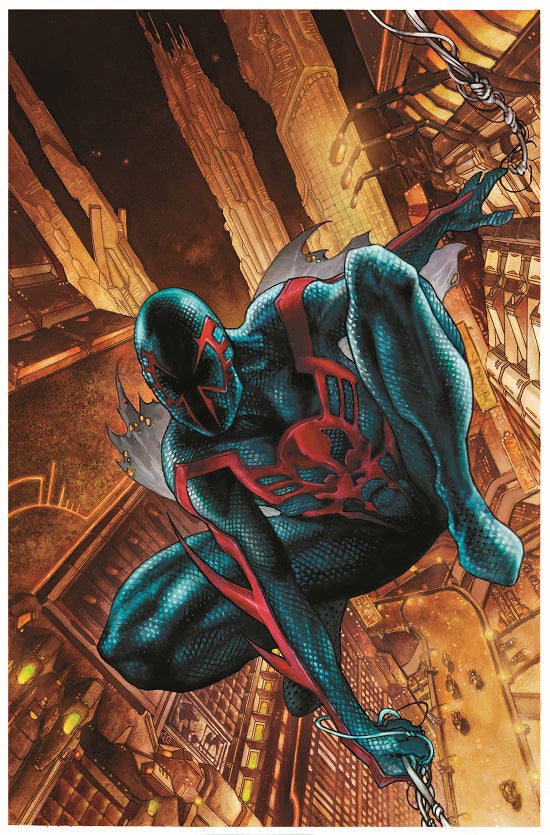 Marvel Comics have announced (via Newsarama) that they will launch a new Spider-Man 2099 series with Peter David, the character's co-creator, writing and Fearless Defenders veteran Will Sliney on art. The new Spider-Man 2099 series stars Miguel O'Hara, sent back to the present day Marvel Universe in order to prevent the world he lived in. Of course, this has many of the same potential time-travel plot holes than Brian Michael Bendis's mega-crossover Age of Ultron did, but until the book launches in July, it will be difficult to know exactly how those questions will be addressed. "Miguel is now trapped in the present day Marvel Universe, so straight away we have to deal with the fact that in the greatest of Marvel traditions, we have a hero out of time," Sliney said. "I'm looking forward to drawing that iconic costume in the surroundings of some of New York's gritty and textured-looking neighborhoods." The title will deal in part with Miguel hoping to reform a businessman whose influence was felt throughout the first Spider-Man 2099 series: Tiberius Stone, Miguel's grandfather, whose son Tyler was the central antagonist for Miguel's original adventures. In the stories, Tyler's company Alchemax was a bit of a futuristic Oscorp, with a ton of money, political power and a Very Bad Man at its head. "Miguel is going to be endeavoring to reform Tiberius Stone; to make him into someone who cares about other people and might actually do a better job of raising Tyler Stone and thus make Miguel's life easier," David said. "Not to mention that he will try to exert influence over what sort of company Alchemax develops into." Back in February, David denied rumors stemming from a Bleeding Cool article that said he was slated to take over a Spider-Man 2099 title, tweeting that the book "may be happening, but not with me." He addressed that denial today on his blog. "The news is officially out on Newsarama so I can tell you guys now: Yes, I will be writing the new Spider-Man 2099 comic. When word of this first circulated weeks ago, I really did NOT know I'd be on board. Marvel only contacted me two weeks ago about it," he wrote. "The first issue ships in July. Be sure to be there."

She-Hulk Star Jessica Gao Is Excited for the Memes

She-Hulk Star Bought All the Comics on eBay