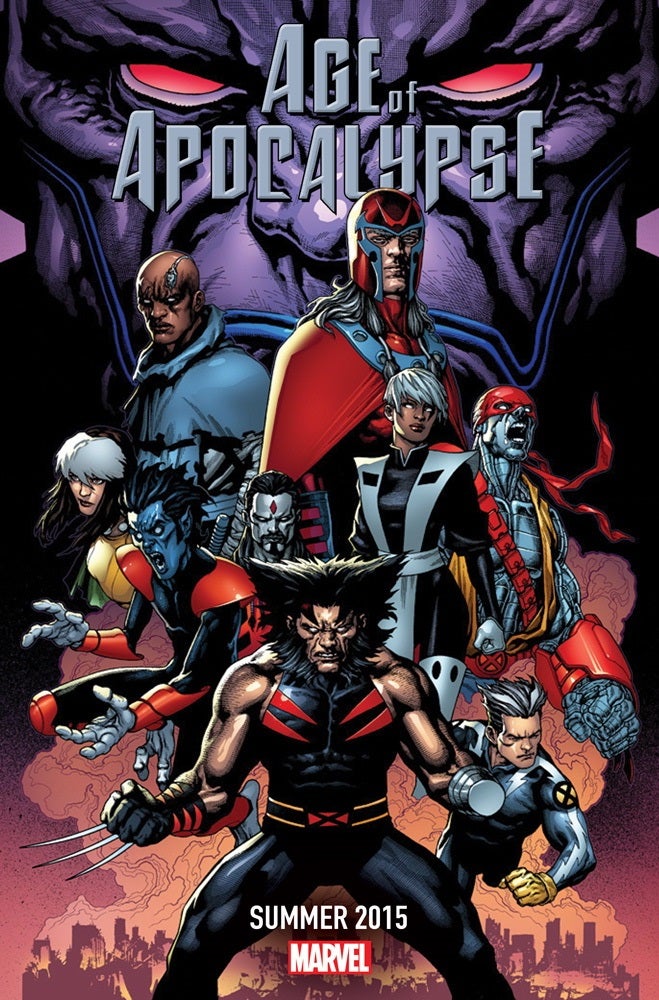 Marvel is sending the X-Men back to the Age of Apocalypse, according to the latest teaser for their slate of summer 2015 events (via Newsarama).

The original Age of Apocalypse was an unprecedented, line wide X-Men event that had every X-title cancelled and replace by new books featuring darker versions of the X-Men characters, from a dismal alternate timeline.

Professor X's incredibly powerful and equally unstable son, Legion, decided to travel back in time and kill Magneto, thinking it would make father's life so much easier. Instead, he accidentally killed Xavier. Without the professor around to form the X-Men, Magneto does in his stead, as a way of honoring his best friend's memory. However, he does so too late to stop Apocalypse's rise to power, during which he conquers the entire western hemisphere.

The crossover event casts the X-Men as struggling freedom fighters under Apocalypse's tyrannical rule. Several characters from that timeline, including Dark Beast, Sugar Man, Blink, and X-Man all made the jump to the mainstream Marvel universe when their reality was supposedly killed off. Despite its status as a dead reality, Marvel returned to the Age of Apocalypse previously in a sequel series to mark the event's tenth anniversary, and then again during the events of Uncanny X-Force, which spawned a spinoff Age of Apocalypse ongoing series.

Age of Apocalypse is just the latest event teaser released by Marvel for summer 2015. Previous teasers include Civil War, Age of Ultron vs. Marvel Zombies, Years of Future Past, Planet Hulk, Armor Wars, House of M, The Infinity Gauntlet,Old Man Logan, Inhumans: Attilan Rising and Ultimate Universe: The End.  Many are assuming that these events have some connection to the Secret Wars mega-event that was announced at New York Comic Con, but Marvel has yet to confirm those theories.