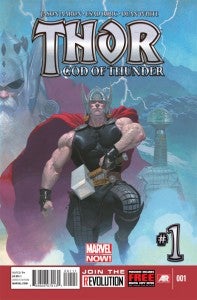 writer Jason Aaron and artist Esad Ribic joined series editor Lauren Sankovitch for one of their Next Big Thing live blogs today, announcing that the series, which launches next month as part of the Marvel NOW! initiative, will strip away the support system of Thor's recent supporting cast and instead focus on the God of Thunder acting on his own, in three different times. "It's me trying to do Dark Kirby," said Aaron. While the old-days Thor and the King Thor will figure heavily into the first arc, Aaron says he wants to keep returning to the characters periodically throughout his run on the series. Past-Thor is fighting alongside the Vikings, present day Thor is going on cosmic adventures, and King Thor, who is the last god in Asgard, explained Aaron. Stringing the three stories together will be one new villain, a serial killer of the gods. The writer, who joked he'd been secretly doing research for years as it regarded beards and drinking, revealed that Young Thor will be Thor before he got his hammer. He's very brash. This is Thor before he was worthy. Instead of the hammer, he's carrying around a giant axe (which we've seen in promotional materials, and which has prompted some speculation by the fans). "There's a story as to how [King Thor] lost his eye, his arm, and why," Aaron assured fans. "When he goes into battle, he replaces his missing arm with an arm of the Destroyer." Marvel also says that the question of whether the Asgardians are truly gods or just aliens with godlike powers and long lifespans (as was implied in the movies) will be explored during Aaron's run. The writer was described as leaning heavily on the idea that they were actually gods, but Marvel says "At the same time, if you like the idea that they're aliens, he doesn't feel anything he's doing negates that idea." It seems that Marvel is positioning Iron Man at the center of Marvel NOW! universe; he not only figures into Hulk and joins Guardians of the Galaxy, but will at least cameo in the first arc of Thor, in spite of the fact that most of it doesn't take place on earth.