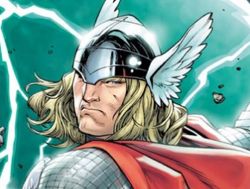 is showing that the release date for Marvel's live action Thor movie has changed yet again. For the second time in as many weeks, Marvel Studios has changed the film's release date. And for some, this should not come as a surprise. Just last week, I reported that the Avengers film was to be pushed back to 2012, while the Thor movie was pushed back to 2011 and the Captain America movie was pushed back a couple months in 2011. The changes were done in an attempt to build up the anticipation for the first ever on-screen team up of Marvel's greatest heroes. I also pointed out that since the release dates of the Thor movie was fairly close to the release date of Spider-Man 4 and The First Avenger: Captain America, Marvel would probably be moving the films again in order to rectify the scheduling overlap of the three films. What was not anticipated was that Marvel would move Thor's release date to May 20, 2011, a mere two weeks after Spider-man 4's anticipated opening weekend. The move could mean that Marvel isn't confident that Spider-man 4 will be complete by then. So in an attempt to reserve a spot in theatres before the very important Memorial Day weekend, Marvel may have decided to replace Spidey with the Norse god of Thunder and not yet announced a new release date for Spider-Man 4.