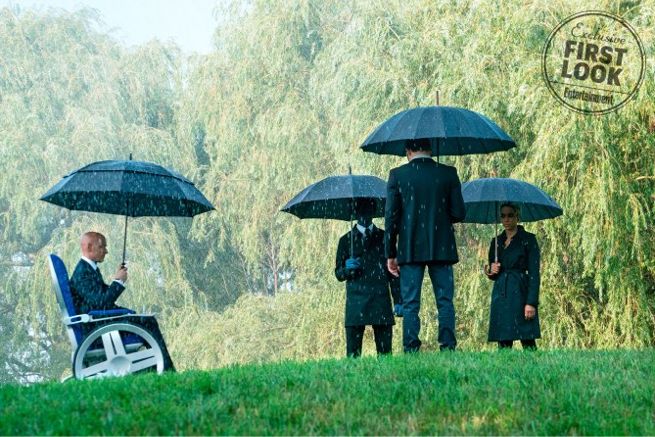 Our first look at X-Men: Dark Phoenix has risen some interesting questions about the Phoenix's origin and the villain Jessica Chastain will be playing - but there was also a very ominous image, which seems to tease the death of a major X-Men character.

In the photo, we see James McAvoy's Charles Xavier at what seems to be a funeral, with X-Men members Nightcrawler (Kodi Smit-McPhee), Storm (Alexandra Shipp) and either Beast (Nicholas Holt) or Cyclops (Tye Sheridan) all in attendance. That leaves Quicksilver and Cyclops or Beast (whichever one isn't in the picture above) on the chopping block, as well as Jennifer Lawrence's Mystique, or Michael Fassbender's Magneto.

The biggest twist to the franchise would be eliminating Magneto from the characters roster. Magneto has (for better or worse) been a/the antagonist for every X-Men movie there's been, something that fans have been critical of for some time. There's also the fact that Fassbender is probably more than ready to move on, as his return for this film was something of a surprise. However, Jennifer Lawrence, Quicksilver actor Evan Peters and Nicholas Holt are all young actors whose respective stars have risen since joining the franchise, and any one of them could be looking for a graceful exit.

X-Men: Dark Phoenix has been described as having a darker tone and bigger stakes than previous X-Men films, and a major character death could certainly convey that new reality. Of course, fans had to suffer through Brett Ratner's bastardized version of the Dark Phoenix Saga in X-Men: The Last Stand, where some franchise-breaking character deaths sent fans into uproar. Hopefully that dark bit of history isn't about to repeat itself.