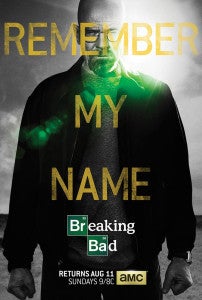 With Breaking Bad breaking its previous ratings best with its "season 5.2" premiere earlier this week, it's no surprise that everyone wants to talk to series star Bryan Cranston. He's also rumored, as luck would have it, to be one of the top candidates in the running to play Lex Luthor in the Batman vs. Superman movie that Warner Bros. has slated for 2015. There are a handful of other names in the mix as well, but most of the fan and media focus has been on Cranston and Mark Strong, who played Sinestro in Green Lantern and appears on AMC's Low Winter Sun. Asked during an interview with Metro about the possibility of playing the iconic villain, Cranston said, "Give me a call. I like Lex Luthor. I think he's misunderstood. He's a loveable, sweet man." Of course, that suggests (the "call me" part, anyway) that he hasn't yet been called, which might put to the test some of the rumors that suggest such-and-such or so-and-so "all but has it." Still, we haven't really believed any of those yet anyway. One stumbling block? Well, he's spent a lot of time bald for the role of Walter White, the cancer patient-turned-druglord in Breaking Bad--and his wife doesn't love it. "She wasn't so keen on the bald head," the actor said. "The bald head ages a man. It's just that she didn't know me that way, and the last six years it's all of a sudden like sleeping with a stranger — who was less exciting than her own husband. So I don't blame her for being upset."