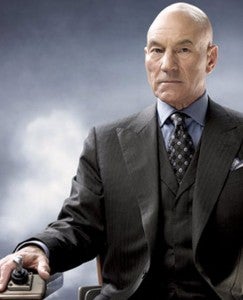 During an interview with Entertainment Weekly that ran this morning , Star Trek: The Next Generation star Sir Patrick Stewart told the magazine that while he's on board for, and excited about, X-Men: Days of Future Past, he doesn't have any idea what's going on. "[Director Bryan Singer] let the cat out of the bag on Twitter, and it included announcing that Sir Ian and myself were going to be in this movie. We are, you know, under contractual oath with 20th Century Fox to say nothing about any prospective X-Men movie including the old team. I use 'old' advisedly. "So it's a kind of awkward position, because lovely Bryan Singer just blurted it all out there. For me the big thrill is knowing that Bryan Singer is attached to this movie, because not only is he a brilliant director, but also I adore him and hope that it might be true and that we do work together at some point in the future. But I'm not being coy. I know nothing about this project. And I'm hoping that might change in the future." Get it? Future? It's a time-travel movie...oh, nevermind. In any event, Stewart says that while he's not yet inked a formal deal to appear in the movie, there doesn't appear to be any doubt it will happen. "I don't know that we're doing it. I have not signed a contract yet. I know there is a project in development, but we have no dates. No detailed casting. Thrilled to hear that my dear friend and colleague Ian McKellen is on board, but I'm sorry, you know, you need to understand, I'm not being cute. I know nothing."

Sir Patrick Stewart on X-Men: Days of Future Past - No Contract Yet, No Clue About the Story