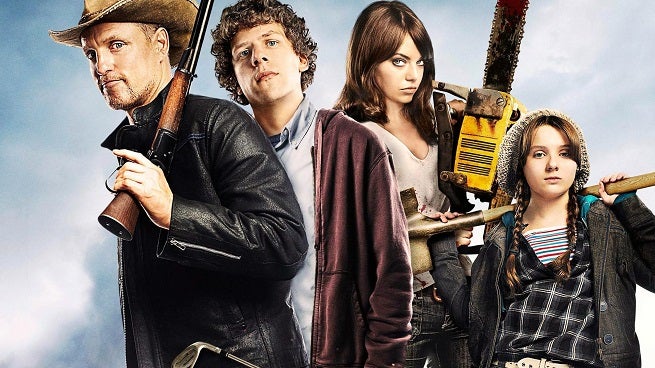 After the failure of a TV pilot based on the property last year, Sony have reportedly hired a new writer to tackle a sequel to their 2009 hit Zombieland -- and they want it fast.

Deadline reports the studio have hired Dave Callaham to write the sequel for director Ruben Fleischer, who helmed the first movie and will return for a second installment. Fleischer will oversee the script. Callaham has a resume that syncs up with the big-budget grindhouse sensibilities of a film like Zombieland, with campy blockbusters like The Expendables and Godzilla on his resume.

The report says -- to no one's surprise -- that it's unclear whether any of the cast will return. Abigail Breslin has Maggie coming up, in which she actually plays a zombie; Woody Harrelson is fresh off True Detective's phenomenal success; and both Jesse Eisenberg and Emma Stone have big superhero tentpoles with matching paychecks under their belts at this point.

It's theoretically plausible that a sequel could bring back the cast from the TV pilot, which received mixed reviews but did have some strong supporters when it was competing in Amazon's Pilot Season program. It's unlikely, though; the pilot -- which rated a 3.5-star (out of five) average review on Amazon and a 5.9/10 on IMDb -- not only failed to make it to series but many of the reviews cited the cast as a major failing.

Bringing back the same characters instead of creating new ones in the same world created a natural point of comparison between the famous and likable cast of the film and their TV counterparts who failed to capture the same energy and chemistry. Without the cast of the first film, it seems more likely they would tell another story set in the same world than it is that they'd follow the same characters with yet another recast.