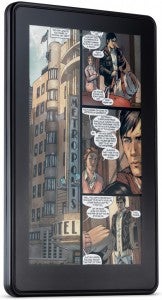 It was hard to read a tech or entertainment blog, or visit a social networking site, yesterday without stumbling across eight or ten stories about the Amazon Kindle Fire, an as-yet-unreleased color e-reader that's being billed by the media as competition for the iPad but which more accurately resembles Barnes & Noble's Nook Color.

All of that is kind of academic for comics readers, though, who have been waiting a while for something cheaper than the iPad to read their comics on, and it looks like the Kindle Fire is it. There's been no clear statement yet as to whether the Comixology app or some other way to purchase digital comics in single-issue format will be compatible with the Fire, but Jim Lee was already quoted in articles yesterday saying that he was excited by the prospects of the device and today we found out more. The publisher announced today on its blog that it is releasing digital copies of 100 existing DC graphic novels/collected editions which will be exclusive to Amazon Kindle customers.

Says Jim Lee when announcing the initiative, “We’ve learned from the success of DC Comics – The New 52 that making our graphic novels available whenever and wherever our readers want is critical to the future growth and health of our publishing businesses–both in print and digital format.”

The impact this will have on the bookstore market or the iPad/iPod Touch market where the Comixology app has recently experienced a lot of success is hard to guess; the full list of graphic novels (available on DC's blog at the link above) is an impressive assembly of hits like Watchmen and Superman: Year One, but they're the kind of evergreen bestsellers that most hardcore fans already own. Even if they sell well on the Kindle Fire it's hard to say what if any impact that will have on physical sales.

It's hard to imagine Barnes & Noble, which has recently dramatically increased its presence in the single-issue comics market but which has not yet found a way to successfully integrate the Comixology app into its Nook Color device (currently the #1-selling e-reader in the country), won't have a response to this soon; let's hope that a little competition will spur app development, price normalization and all the things that have made the music industry more consumer-friendly since the introduction of iTunes. Meanwhile, of course, The Nook Color 2 has been long rumored and sounds a bit more like an actual iPad, with a wider variety of apps including Netflix (Kindle Fire will, of course, not support things like iTunes, Hulu and Netflix which are direct competitors to Amazon's video-on-demand services).

No price points have been announced for the graphic novels.