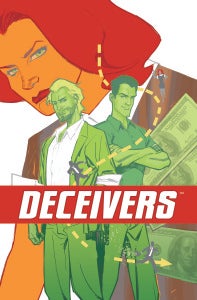 Steven Grant, the creator of the best-selling comic book series 2 Guns (the basis for the recently-released movie of the same name), will launch a new, six-issue miniseries through 2 Guns publisher Boom! Studios in December, the publisher officially announced today. Titled Deceivers, the title will be illustrated by newcomer Jose Holder. The story revolves around Lincoln McCord and Prince Adony Zaruka, two American con men living abroad in Europe, posing as an oil magnate and the descendant of long-lost royalty in order to live the high life by leeching off the European elite. But when an international thief begins wreaking havoc on their marks, the deceivers are enlisted by a rogue CIA agent to help entrap him.